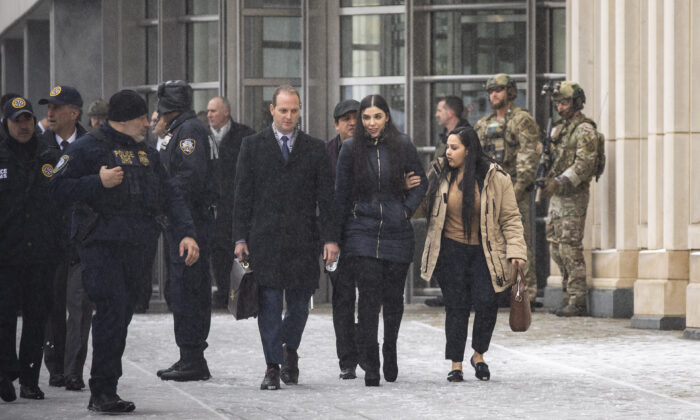 The wife of the notorious Mexican drug lord Joaquín “El Chapo” Guzmán Loera was arrested on Monday for her alleged role in international drug trafficking, the Justice Department (DOJ) announced.

Emma Coronel Aispuro, 31, a dual U.S.-Mexican citizen, was arrested at Dulles International Airport in Virginia, the department said. Coronel Aispuro has been accused of participating in a conspiracy to distribute cocaine, methamphetamine, heroin, and marijuana for the purpose of importing these illicit drugs into the United States, according to court documents (pdf).

Prosecutors are also alleging that Coronel Aispuro conspired with others to assist Guzmán in his 2015 escape from Altiplano prison in Mexico. They further alleged that she helped plan another escape for her husband prior to his extradition to the United States in January 2017.

Prosecutors are also alleging that Coronel Aispuro, who married Guzmán as a teenager and whose father is a member of the Sinaloa Cartel, grew up with the knowledge of the drug trafficking industry. They also claim she understood that the drug proceeds that she controlled during her marriage with Guzmán were derived from shipments of various narcotics, court documents say.

Guzmán was sentenced to life plus 30 years three months in prison on July 17, 2019, after being found guilty of operating a continuing criminal enterprise, use of firearms, and various charges of conspiracy to import and distribute cocaine, heroin, and marijuana. He also engaged in multiple murder conspiracies as a top leader of the Sinaloa Cartel, which is known as one of Mexico’s largest and most violent drug trafficking organizations.

In the trial, which lasted several months, prosecutors used more than 50 witnesses to detail Guzmán’s involvement in making billions of dollars distributing drugs in the United States. According to the New York Post, which dedicated reporters to cover his trial, 14 former associates were called to testify against him.

Coronel Aispuro made headlines following Guzmán’s conviction when it was announced that “El Chapo” will be launching his own fashion brand from inside prison. He signed a contract from his prison cell in order to launch his name fashion brand, called “El Chapo Guzmán: JGL LLC.”

Jack Phillips and Zachary Stieber contributed to this report.

The article is from the Internet, and the content does not represent the position of this website.丨This website usesBY-NC-SAagreement for authorization
please indicate the link for reprint:Wife of Mexican Drug Kingpin ‘El Chapo’ Arrested on Drug Trafficking Charges