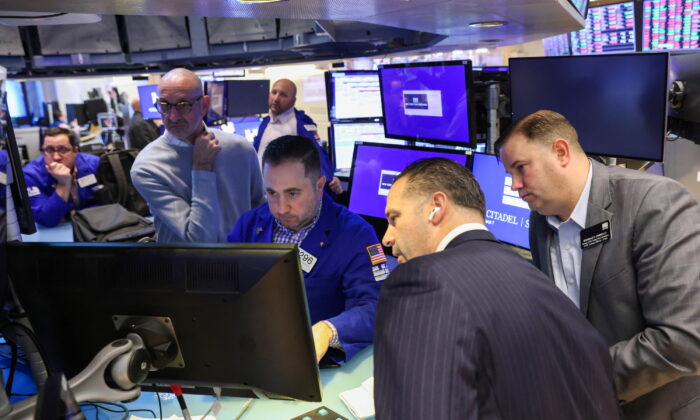 Brent crude fell back below $100 a barrel after scaling as much as $139 last week, providing some relief for U.S. stocks that have had a wild ride so far this year on worries about surging inflation and the Fed’s moves to combat it.

“There’s a bit of a respite today, in the sense that oil prices are tumbling and markets are reflexively reacting positively to that,” said Todd Lowenstein, chief equity strategist of The Private Bank at Union Bank.

“We look oversold and the move looks extreme in the short run, but they’re also proportional to the events that have unfolded before us.”

Megacap growth stocks gained with Microsoft Corp. and Amazon.com up 2.2 percent and 3 percent, respectively, providing the biggest boost to the S&P 500 and the Nasdaq.

Traders see an 85 percent chance of a 25 basis point rate hike by the U.S. central bank at the conclusion of its meeting on Wednesday. However, investors will likely watch out for projections showing just how far policymakers think rates will need to rise this year and in 2023 and 2024 to tame inflation.

“They need to normalize interest rates, independent of the war in Ukraine and maybe commodity prices softening, because inflation is becoming sort of entrenched, it’s become more broad base now,” Lowenstein said.

Meanwhile, investors also kept a closely tracked a steep jump in daily COVID-19 infections in China, and progress in Ukraine-Russia talks to end their weeks-long conflict.

In the latest hint at compromise, Ukrainian President Volodymyr Zelensky said Kyiv was prepared to accept security guarantees that stop short of its long-term objective of the NATO alliance membership, which Moscow opposes.

Delta Air Lines Inc. and United Airlines jumped nearly 7.5 percent each, after the U.S. carriers raised their current-quarter revenue forecasts, even as they trimmed capacity.

By Devik Jain and Sabahatjahan Contractor