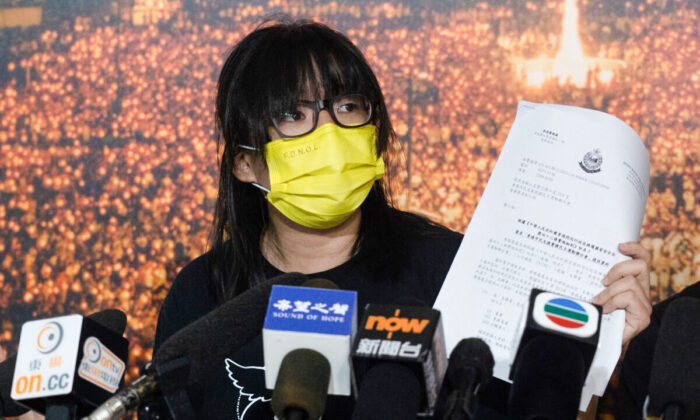 “ experts urged the Government to urgently repeal and independently review the National Security Law to ensure it is both human rights and international law compliant,” the four rapporteurs said in a statement on Oct. 12.

y pointed to a case involving Chow Hang-tung, a prominent barrister and former vice-chair of the now-disbanded Hong Kong Alliance in Support of Patriotic Democratic Movements of China, a local advocacy group known for organizing the annual vigil in Hong Kong commemorating victims of the 1989 Tiananmen Square Massacre.

Chow and three other leaders of the Alliance were arrested on Sept. 8 after they refused to cooperate in a national security investigation, in which the advocacy group was accused of being a “foreign agent.”

A day later, Chow was charged with “incitement to subversion” under the national security law. same charge was also slapped on two other Alliance leaders, Lee Cheuk-yan and Albert Ho, who have been serving sentences for their roles in unauthorized assemblies in 2019.

Beijing imposed the national security law on Hong Kong last summer, criminalizing vaguely defined crimes of secession, subversion, terrorism, and collusion with foreign forces, with a maximum penalty of life imprisonment. Since then, dozens of the city’s pro-democracy opposition leaders have now either fled overseas, are facing prosecution, or are in jail.

Chow was denied bail on Sept. 10 and she pleaded not guilty to the incitement charge early this month.

“Terrorism and sedition charges are being improperly used to stifle the exercise of fundamental rights, which are protected under international law, including freedom of expression and opinion, freedom of peaceful assembly, and the right to participate in public affairs,” the experts stated.

International rights groups have expressed similar concerns about the impact of the national security law in Hong Kong. In June, Amnesty International stated the law “has created a human rights emergency” in the city. In the same month, Reporters Without Borders declared that the law has put the city’s press freedom “in grave danger.”

U.S. government has sanctioned more than a dozen Chinese and Hong Kong officials for their roles in suppressing democracy in Hong Kong.

four experts also warned the Hong Kong government not to so easily file subversion and terrorism charges against individuals.

“se labels should not be applied to offences that do not meet the thresholds provided for in existing international standards,” the experts stated.

y added: “ cheapening of the seriousness of terrorist acts and sedition offences, when Governments improperly use them to justify quelling domestic dissent, limiting protests and curbing criticism by civil society and human rights defenders, is deeply troubling.”

Finally, the experts questioned how organizations in Hong Kong could be accused of being “foreign agents” under the national security law for simply receiving funds from foreign political groups.

“Such regulatory measures, by imposing undue restrictions on funding and punishing recipients of foreign funding, infringe on the right to freedom of association as well as other human rights,” the experts stated.

y urged the Hong Kong government to make sure that organizations in the city can “seek, receive, and use funding from foreign or international sources, without undue impediments.”

In response to the rapporteurs’ statement, Hong Kong’s Department of Justice defended the national security law in a statement on Oct. 13, saying the law was “in line with the international practice of safeguarding national security.”

“re needs to be a reinvigoration of an independent judiciary in Hong Kong, a pause in applying this law, and a fundamental reconsideration of its use,” the experts concluded.