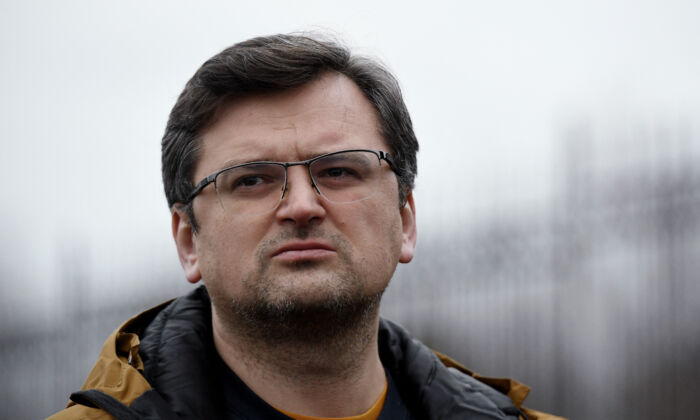 Kuleba‘s remarks came amid reports that the Chinese officials knew of Russia’s plan to attack Ukraine in advance, and had asked Moscow officials to delay the attack until after the Beijing Winter Olympics. Some analysts also suggest that Moscow’s invasion wouldn’t be able to continue without the support from the communist party in Beijing.

On the opening day of the Winter Olympics, Chinese leader Xi Jinping and Russian President Vladimir Putin met face-to-face in Beijing. The summit culminated in a lengthy joint document announcing that the two sides had “no limits” friendship.

One day after close of the Games, Putin announced the moving of troops into two separatist regions in eastern Ukraine, a precursor to the full-scale invasion three days later.

“Chinese diplomacy has sufficient tools to make a difference, and we count that it is already involved,“ said Kuleba, adding, “their efforts will be successful.”

Kuleba told the press conference that the “assurance” he received from his Chinese counterpart Wang Yi is that “China is interested in stopping this war through diplomacy.”

Kuleba appeared to be referring to a phone call with Wang on March 1, during which Kyiv asked Beijing for help in mediating a ceasefire.

While Kuleba claimed Beijing signaled it was ready to play as a peacemaker, the Chinese regime’s readout of the same phone call did not indicate that Wang had agreed to this proposition.

The Chinese regime has so far declined to call Russia’s actions an invasion. It has also refused to join West-led condemnations and sanctions against Moscow, and has blamed Washington for instigating the conflict by encouraging NATO’s expansion, a key justification to Putin’s invasion.

In a phone call with U.S. Secretary of State Antony Blinken on Saturday, Wang called for all sides to engage in negotiations, but urged the United States and Europe to “pay attention to the negative impact of NATO’s continuous eastward expansion on Russia’s security effort.”

Blinken told Wang that “the world is watching to see which nations stand up for the basic principles of freedom, self-determination and sovereignty,” said Ned Price, the State Department spokesperson.

During the Winter Paralympics Opening Ceremony on March 4, the state-run broadcaster CCTV didn’t translate and then silenced the speech given by President of the International Paralympic Committee Andrew Parsons, during which he denounced Russia’s invasion said that he is “horrified at what is taking place in the world right now.”

Frank Fang contributed to this report