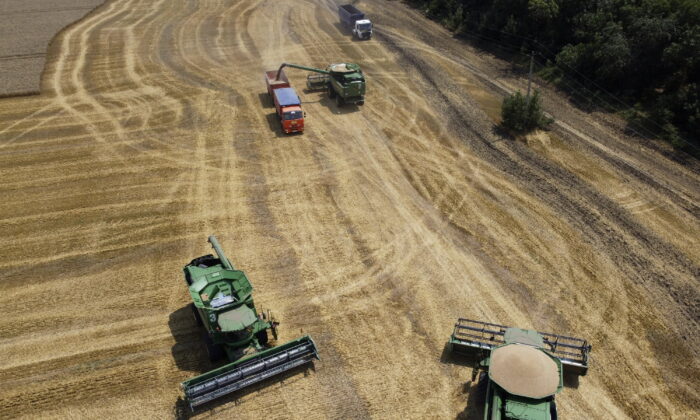 The government of Ukraine has imposed new rules for food exports, banning some items from being exported to other nations as the country attempts to fight off a Russian invasion.

“In order to prevent the humanitarian crisis in Ukraine, market stability, and meet the needs of the population in critical food products, the Government has established new rules for the export of agricultural goods,” Roman Leshchenko, minister of Agrarian Policy and Food of Ukraine, said in a March 8 statement.

The new directive forbids the export of oats, millet, buckwheat, sugar, salt, wheat, and cattle and its by-products. Items such as wheat and a mixture of wheat and rye (meslin), the meat of domestic chickens, sunflower oil, and corn can now only be exported under specific declarative licensing. Other than the listed items, everything else can be exported as usual, the government confirmed.

Ukraine and Russia combined account for roughly 80 percent of global sunflower oil exports. As such, supply disruption of the oil means that buyers will have to look for alternatives. India is reportedly looking at soy oil and palm oil as alternatives to make up for the loss of sunflower oil.

Ukraine is often called the “breadbasket of Europe” and is a major exporter of grains. The country accounts for 19 percent of global rapeseed exports, 18 percent of barley exports, 16 percent of corn exports, and 12 percent of wheat exports.

About 40 percent of Ukraine’s wheat and corn exports are sent to Africa or the Middle East. Wheat futures at the Chicago exchange are already up by roughly 60 percent this year. The agriculture minister of China, the top producer of wheat in the world, has said that the winter wheat crop could be the “worst in history,” adding more upward pressure on wheat prices.

Disruption in wheat supplies will affect nations as far away as Indonesia, where the staple is used to make noodles. Ukraine wheat accounted for 26 percent of all Indonesian wheat usage in 2021. The rise in noodle prices will be particularly harmful to the lower-income slab, according to a minister.

Prior to the war, Ukraine was expecting to produce 37 million tons of corn and 26 million tons of wheat in 2022. But now, experts see this as unlikely. Upcoming wheat and corn planting and harvesting could be hit, extending supply worries for the items.

The Ukraine war is a “catastrophe on top of a catastrophe,” Svein Tore Holsether, CEO of Yara International, one of the largest fertilizer companies in the world, told BBC. Disruption in the supply of fertilizers can reduce crop yields by 50 percent.

“We were already in a difficult situation before the war … and now it’s additional disruption to the supply chains, and we’re getting close to the most important part of this season for the Northern hemisphere, where a lot of fertilizer needs to move on, and that will quite likely be impacted,” Holsether said.