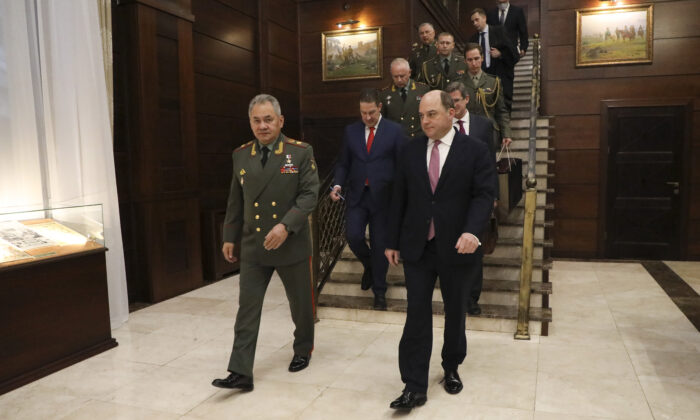 UK intelligence experts are concerned that Russia will use “fabricated” claims regarding chemical weapons in Ukraine to move forward with a “false-flag operation.”

The UK Ministry of Defence said in a March 14 report that “Russian accusations that Ukraine intends to use chemical and biological weapons continue” but officials noted that they have “seen no evidence to support these accusations.”

“Russia could possibly be planning to use chemical or biological weapons in a ‘false-flag’ operation. Such an operation could take the form of a faked attack, a staged ‘discovery’ of agents or munitions, or fabricated evidence of alleged Ukrainian planning to use such weapons,” officials said, adding that such a “false-flag” attack would “almost certainly be accompanied by extensive disinformation to complicate attribution.”

Officials added that intelligence suggests that Moscow had likely intended to use false-flag operations as justification for its invasion of neighboring Ukraine on Feb. 24.

Prior to Russia’s invasion of Ukraine, John Kirby, the Pentagon’s spokesman, told reporters in Washington that U.S. officials had information that indicated Russia was “working actively to create a pretext for a potential invasion, for a move on Ukraine” and was looking to conduct “a false-flag operation, an operation designed to look like an attack on them or their people, or Russian speaking people in Ukraine, as an excuse to go in.”

Russia has in recent months repeatedly perpetuated the accusation that U.S.-funded laboratories in Ukraine are developing biological warfare weapons. Even before its invasion of Ukraine, such allegations were being aired on Russian state-run media.

However, analysts believe that the narrative is part of the Kremlin’s plan to create a false-flag operation in an attempt to justify using chemical weapons operations in Ukraine itself.

The Russian Ministry of Defense issued a statement on Telegram accusing Ukraine of having destroyed pathogens being studied at a lab in Ukraine that the ministry says is funded by the U.S. Department of Defense.

Russia’s allegations regarding the biological laboratories appeared to be repeated by the Chinese regime on March 7.

Yet both the United States and Ukraine maintain that the laboratories seek to prevent bioweapons and pathogens, a project backed by the Defense Threat Reduction Agency, an agency within the U.S. Department of Defense (DoD).

In response to Russia’s allegations, State Department spokesman Ned Price said in a statement that the disinformation being spread by Russia is “total nonsense and not the first time Russia has invented such false claims against another country.”

The UK Ministry of Defence’s report comes as NATO Secretary General Jens Stoltenberg warned on March 13 that the Kremlin might use chemical or biological weapons in its invasion of Ukraine, which would amount to a war crime.

“In recent days, we have heard absurd claims about chemical and biological weapons laboratories,” Stoltenberg said during an interview with German newspaper Welt am Sonntag.

The NATO Secretary General echoed comments by the UK’s Ministry of Defense that Russia could be using the claims to create a false pretext to justify its actions.

“Now that these false claims have been made, we must remain vigilant because it is possible that Russia itself could plan chemical weapons operations under this fabrication of lies. That would be a war crime,” Price said.

White House press secretary Jen Psaki has also cautioned officials to be on the lookout “for Russia to possibly use chemical or biological weapons in Ukraine, or to create a false flag operation using them.”