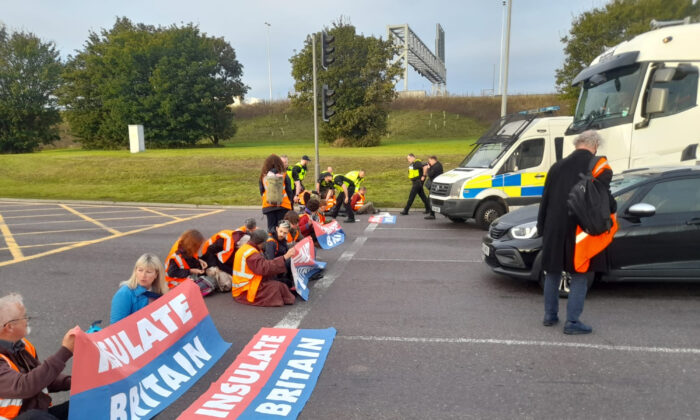 Angry drivers clashed with climate protesters who blocked traffic once again on Wednesday morning, in some cases dragging them off the roads.

During the morning rush hour, around 20 protesters from climate group Insulate Britain (IB) blocked a junction near a busy industrial estate in Thurrock, in the outskirts of London.

y sat or laid down in the road at the junction of St Clements Way and London Road, forcing multiple vehicles including HGVs to stop and turn round.

Lorry drivers blasted their horns and motorists ripped banners out of the hands of demonstrators. A female protester was nearly run over after stopping in front of a blue Hyundai car, and was berated by the driver who told her “This is stupidity.”

Some members of the group were dragged off the road multiple times by drivers, who pulled their backpacks and clothing. But they immediately returned to the middle of the road and sat down again.

Footage circulated online showed one woman get out of her black Range Rover and argue with the climate activists blocking her car, saying “my son is 11 and he needs to get to school today.”

Essex Police said officers responded to the situation quickly. “We were called at 8.26 a.m. and officers were on scene within five minutes,” the force said on Twitter.

Police said 35 people had been arrested in Thurrock, including 16 at Junction 31 of the M25 and 19 in Stonehouse Lane, Purfleet.

Insulate Britain, an offshoot of Extinction Rebellion, has been demanding that the government insulate all homes across the UK to cut carbon emissions.

After the group repeatedly shut down parts of M25, the UK’s busiest motorway, last month, the government obtained an injunction against the protests and warned that activists would face possible imprisonment if they made further such attempts.

A survey result published last week by YouGov showed that 72 percent of the people surveyed on Oct. 5 and Oct. 6 were against the group’s actions, up 13 percent from the result of a survey from three weeks prior.

Around 18 percent of participants supported IB’s actions, and 10 percent said they didn’t know the answer.

Among participants who considered the environmental issue the most important to them, about 58 percent opposed IB’s tactics, 33 percent supported them, and 10 percent couldn’t decide.

Asked if IB’s actions—such as blocking roads and fixing themselves on roads and other infrastructure or objects—help or hinder their cause from their own perspective, 67 percent of those surveyed said they hinder their cause, a 10 percent increase from three weeks prior.

Lily Zhou and PA contributed to this report.