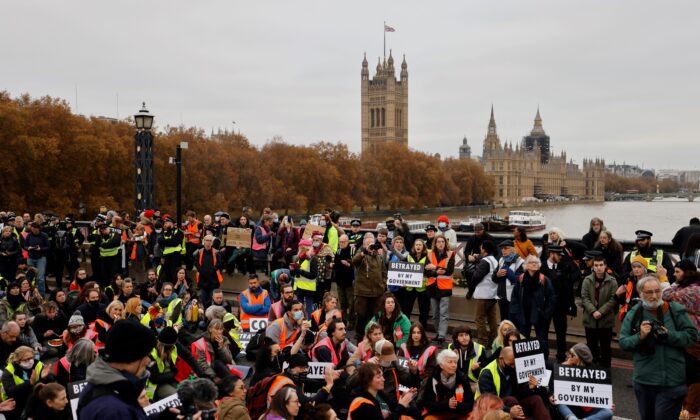 group was jailed this week for breaching an injunction designed to prevent the road blockades which have sparked anger among motorists and others affected by the protests.

Up to 200 protesters rallied in central London against the jail terms, chanting “power to the people.” Cheers rang out during the walk as a campaigner told the crowd that “good people have a duty to disobey bad laws.”

#UPDATE | We are responding to a demonstration which is blocking Lambeth Bridge. Officers were called at 14:10hrs and remain at the scene. Road closures are in place. Traffic has had to be diverted for the safety of all.

Metropolitan Police said on Saturday afternoon: “We are responding to a demonstration which is blocking Lambeth Bridge. Officers were called at 1410 and remain at the scene. Road closures are in place. Traffic has had to be diverted for the safety of all.”

Insulate Britain said it was not involved with setting up the event, which was described by those who took part as community-led.

Insulate Britain began a wave of protests in September and has blocked the M25 motorway, other roads in London including around Parliament, roads in Birmingham and Manchester, and around the Port of Dover in Kent.

Nine activists from the group were jailed on Wednesday for blocking the M25 motorway in violation of a court injunction.

nine activists, aged between 20 to 58, admitted on Tuesday to breaching the injunction, which was granted to the National Highways on Sept. 21 after Insulate Britain activists ran in front of moving cars and lorries on the motorway.

Sentencing the activists on Wednesday, Judge Dame Victoria Sharp said there was no alternative to custodial sentences given that the group’s actions were so serious and they had made it clear they intended to further flout court orders.

“ defendants, or some of them, seem to want to be martyrs for their cause and the media campaign surrounding this hearing appears designed to suggest this,” she said. “We, however, have to act dispassionately and proportionately.”

Sharp also said that the activists caused harm “beyond the inconvenience and economic damage” and risked the safety of the defendants and the public.

Lily Zhou and PA contributed to this report.