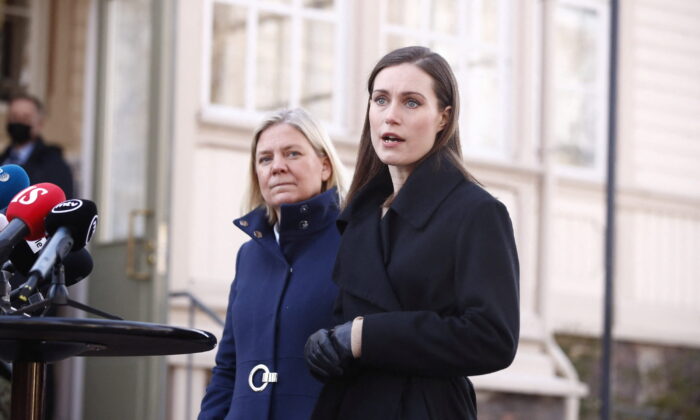 HELSINKI—Sweden and Finland will further strengthen their security cooperation in light of Russia’s invasion of Ukraine, the prime ministers of both countries said on Saturday, but they were non-committal on joining NATO.

Sweden and Finland have strong historic ties and a close military cooperation, including joint drills and information sharing.

The invasion, called a “special military operation” by Russia, has also forced a quick change in attitude towards NATO in both countries, which are currently outside the NATO-alliance.

Polls in recent days showed a majority for joining NATO in both countries for the first time ever. Marin said it was “understandable” that more people in both Sweden and Finland now want to join NATO.

“We are now having this discussion in Finland,” Marin said. “We will have these discussions within parliament, with the president, within the government, and between the parties.”

In Sweden, the governing Social Democrats have long resisted calls from the center-right opposition to join NATO. Andersson said it was natural that the discussion should come up again, but avoided questions on Sweden joining the military alliance.

“The security situation has been altered in a dramatic way,” Andersson said. “I have met the party leaders from the other Swedish parties several times in the last week and we are discussing a number of issues,” she said.

The two countries already have a close cooperation with NATO and are invited to all consultations on the Ukraine crisis. Secretary General Stoltenberg said in January they could join the alliance “very quickly” if they decided to apply for membership.

Finland’s President Sauli Niinisto said on Friday the United States and Nordic countries would “initiate a clear process to step up defense and security cooperation” after a meeting with U.S. President Biden that included a call to Magdalena Andersson.

By Anne Kauranen and Johan Ahlander