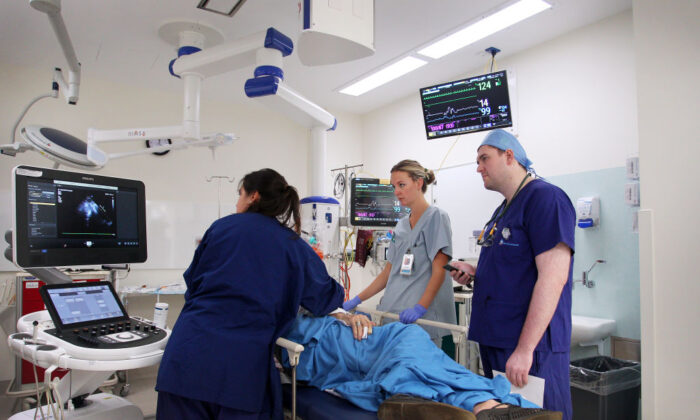 Australians can expect longer wait times when they next visit hospital, even if they need urgent surgery, according to a new report card from Australia’s leading medical union.

Dr. Omar Khorshid, president of the Australian Medical Association (AMA), said that despite a drop in patient volumes during the COVID-19 pandemic, the hospital system’s performance did not improve.

“What’s remarkable about this year’s report card is it shows hospitals continued to struggle in 2020 when Australians stayed home, and we weren’t dealing with the highly contagious Delta variant or high COVID-19 hospitalisations,” Khorshid said in a press release on Nov. 5.

Korshid said unless dramatic action was taken to “help our hospitals, this is as ‘good as it gets’ when it comes to hospital performance.”

Some key findings from the Public Hospital Report Card 2021 (pdf) outlined how Australians seeking “Urgent” emergency treatment—which needs to be carried out in 30 minutes or less—had a one in three chance of being seen on time in the worst-performing jurisdiction in the country.

“So, if you are classed as Urgent, which can include being severely ill, bleeding heavily from cuts, having a major fracture or severe hypertension—you have a one in three chance of being seen within 30 minutes in the Australian Capital Territory; and approximately a one in two chance in South Australia, and Western Australia,” Korshid said.

“At the very best, you’ll have a three in four chance of being seen in 30 minutes if you live in New South Wales, after arriving at the hospital,” he added.

“Only 75 percent within the recommended timeframe for what’s known as Category 2 elective surgery,” he said.

“In reality, what this means is that 25 percent of people will wait longer than 90 days for surgeries, which in this category can include treatment for an unruptured brain aneurism, decompression of a spinal cord and treatment for ovarian cysts or unhealed fractures.”

In Tasmania, there was a 63 percent chance that patients would wait longer than 90 days for elective surgery, noting that it was “hard to believe for a world-class health system.”

“It doesn’t matter where you live—you will be waiting longer than ever if you rely on the public hospital system. Your condition will probably worsen. We need to tell the truth here—no single jurisdiction improved its performance on this measure,” he said.

“With this year’s report card covering a lockdown period, it was expected that performance would improve, across the board. fact that it only improved a little, in a few places, in an inconsistent way should really worry all Australians.”

COVID-19 has exposed the already fraught state of the country’s public health systems, with chronic issues such as ambulance ramping and mismanagement coming to light.

“ trouble is that our public health systems are highly unionised, and what we found in Queensland back when I was premier was there weren’t the controls and management measures in place to ensure that the system really was performing properly,” he told Pezou. “Indeed, we found there were significant rorts going on as well.”

However, after Newman was voted out in 2015, the system relapsed into its previous state. current Labor government has responded by pledging AU$100 million to address extensive delays and ambulance ramping issues that have proliferated again.