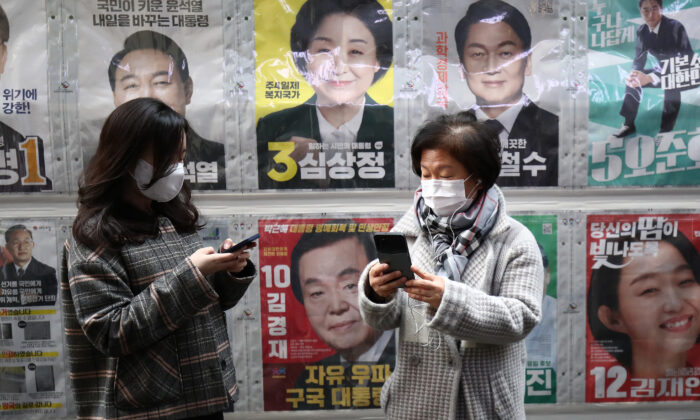 South Korean voters went to the polls on Wednesday in a presidential election marred by political scandals, at a time when the country has seen a spike in COVID-19 cases.

Election officials said an average voter turnout of 5 percent nationwide two hours after polls opened at 6 a.m. on Wednesday local time. Vote counting will begin after the polls close at 7.30 p.m., with the final tally to be completed early Thursday.

About 37 percent, or 16 million people, of the 44 million registered voters have already cast ballots in early voting on Friday and Saturday, Yonhap News Agency reported.

Yoon Suk-yeol of the conservative People Power Party and Lee Jae-myung of the ruling Democratic Party are the front-runners of the presidential race. Both candidates have been dogged by controversies during their election campaigns.

Lee, 57, former governor of Gyeonggi Province, was accused of abusing his power as Seongnam’s mayor in 2012 to commit his late brother to a mental facility. He was also suspected of being involved in a corruption case involving the Seongnam development project in 2015.

Yoon, 61, former top prosecutor, had been accused of seeking advice from shamans and assisting former President Park Geun-hye in winning the last election while serving as senior prosecutor.

Their spouses have also been implicated in scandals, with Lee’s wife, Kim Hye-kyung, accused of misusing public employees and government credit cards when her husband was governor.

Yoon’s wife, Kim Keon-heem, came under fire for falsifying her resume to apply for jobs at two universities and allegedly manipulating stocks.

Ahn Cheol-soo of the opposition People’s Party withdrew his candidacy last week and declared his support for Yoon. Current liberal President Moon Jae-in is barred by law from seeking reelection.

Yoon and Lee each bring different foreign policy approaches to the table.

Yoon seeks to restore conservative rule and has vowed to seek a stronger U.S. security commitment to deter North Korean military threats, saying that preemptive strikes may be necessary if Pyongyang displays signs of imminent attack.

Lee, on the other hand, has vowed to continue Moon’s conciliatory approach toward North Korea. He believes that South Korea could act as a mediator between Washington and Pyongyang to revive denuclearisation talks stalled in 2019.

The presidential election is taking place against the backdrop of a rise of COVID-19 cases in South Korea, with 342,446 new cases reported on Wednesday. COVID-19 patients will be permitted to cast ballots from 6 p.m. to 7.30 p.m. after regular voting closes.

The National Election Commission has revised procedures to allow them to vote directly into ballot boxes, following allegations that election officials had collected votes from COVID-19 patients in plastic bags and containers during Saturday’s early voting.

The winner of the election will take office on May 10 for a single five-year term.