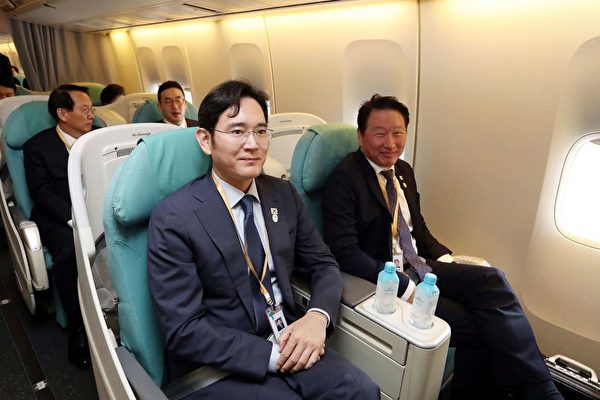 Lee appeared at a business airport in Seoul in the early morning of Nov. 14. He briefly talked to the press before hopping onto a charter flight to Canada.

When asked whether he would finalize the foundry investment plan in the United States, Lee replied, “I will meet many [semiconductor] partners.”

This is Lee’s first trip abroad since his parole in August. It is also his first visit to the United States in more than five years. Lee was sentenced to two and a half years in prison on suspicion of bribery in January this year. Deducting the time he had previously been in custody, his prison team was originally set to end next year.

On his trip, Lee was expected to first visit Samsung’s artificial intelligence laboratory in Toronto, Canada, and then go to the United States to conduct final consultations on site selection for Samsung’s first U.S. foundry plant. He will also go to Boston to meet with American pharmaceutical company Moderna, to help obtain COVID-19 vaccines for his fellow countrymen.

Financial Expert: South Korea Readjusting Its Relations with China and US

In the past two years, the economic decoupling between China and the United States has become a heated discussion that has then evolved into “precision decoupling,” with a focus on technology decoupling, Liao said.

He further pointed out that the trend will not change with power transfer from President Donald Trump to President Joe Biden, as it has become a bipartisan consensus.

At the beginning of this year, when the United States rolled out its new policies regarding the supply chains, South Korea noticed with shock that it was excluded from all U.S. high-tech supply chains. This means, if the United States has developed any state-of-the-art technology, South Korea will be restricted from getting the technology transfer or the equipment output, Liao said.

“This makes South Korea very nervous. n why did the United States exclude South Korea from its high-tech supply chain? Of course it is because South Korea is too close to China,” Liao explained.

Liao explained that from the perspective of the United States, it entered the agreement out of security concerns. “If North Korea ever fires missiles at South Korea, the United States will face a chip shortage crisis. refore, U.S.-based semiconductor chip manufacturing is of vital importance,” he said.

She is expected to discuss a number of economic and trade issues with South Korean officials, including the semiconductor supply chain, a digital trade agreement, South Korean companies investing in the United States, and climate change cooperation, according to the Korean Herald.

outlet also revealed that before Tai’s visit, South Korean chipmakers such as Samsung and SK hynix were asked by the U.S. Department of Commerce to answer a list of questions. questionnaire involved sensitive business information such as types of technology nodes, semiconductor materials, and other devices. se companies were also asked to reveal their order backlogs and major customers, as well as certain details of their inventory status.

Liao analyzed that these are clear indications that the United States is wooing South Korea to counter the Chinese Communist Party (CCP).

“ United States will certainly adhere to its path on the issues of supply chains and the U.S.-China Trade War, as it is a bipartisan consensus,” he said. “Tai’s visit to the three Asian countries is aimed at taking control of the entire high-tech supply chain, which is part of the restructuring effort.”