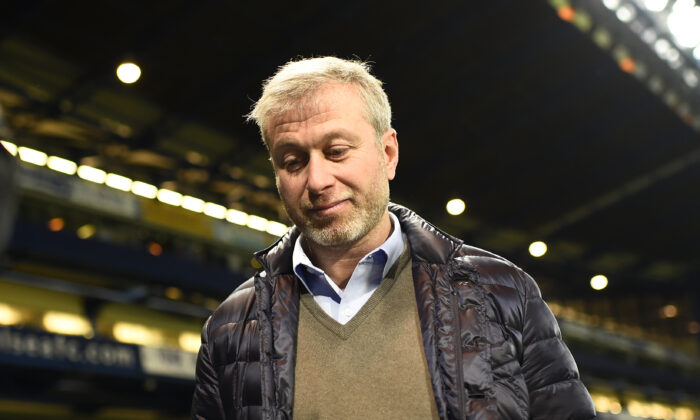 Russian billionaire Roman Abramovich has been hit with a UK travel ban and asset freeze, as Britain tightens the screws on oligarchs with close ties to Russian President Vladimir Putin amid backlash to the Ukraine invasion.

Abramovich’s name features alongside six other wealthy Russian businessmen that have been added to the UK sanctions list, according to a notice issued on March 10 by the UK Office of Financial Sanctions Implementation (pdf).

The Russian businessmen will be subject to asset freezes and travel bans, with attempts to circumvent the sanctions a criminal offense.

“There can be no safe havens for those who have supported Putin’s vicious assault on Ukraine,” British Prime Minister Boris Johnson said in a statement.

Putin calls the invasion of Ukraine a “special military operation” meant to degrade its military and topple the government. Disseminating information that refers to the conflict a “war” or “invasion” could land someone in jail for 15 years in Russia, according to a new law, which marked one of the sharpest clampdowns on free speech in Russia in recent history.

The UK list also includes Igor Sechin, the chief executive of Russian oil group Rosneft. Sechin, who is said to be a close associate of Putin, made headlines recently after France seized his superyacht.

“Today’s sanctions show once again that oligarchs and kleptocrats have no place in our economy or society. With their close links to Putin they are complicit in his aggression,” said British Foreign Secretary Liz Truss.

Also on the list is Oleg Deripaska, who has stakes in En+ Group and founded the Russian aluminium giant Rusal.

Deripaska made headlines recently when he said publicly that peace was needed as soon as possible in Ukraine and warned that “the whole world will be different after these events and Russia will be different.”

Also on the list are Andrey Kostin, chair of VTB Bank, Alexei Miller, CEO of energy company Gazprom, Nikolai Tokarev, president of the Russian state-owned pipeline company Transneft, and Dmitri Lebedev, chair of the board of Bank Rossiya.

“Today’s sanctions are the latest step in the UK’s unwavering support for the Ukrainian people. We will be ruthless in pursuing those who enable the killing of civilians, destruction of hospitals, and illegal occupation of sovereign allies,” Johnson said.

Ukrainian officials said that a children’s hospital and maternity ward in Mariupol was destroyed by a Russian airstrike on Wednesday, with Russia dismissing it as “fake news.”

Adding Abramovich to the sanctions list could complicate his plans to sell Chelsea Football Club.

British culture secretary Nadine Dorries said in a Twitter post Thursday that efforts would be made not to disrupt the operations of the football club—and the sport more broadly—in Britain.

“Today’s sanctions obviously have a direct impact on Chlesea & its fans. We have been working hard to ensure the club & the national game are not unnecessarily harmed by these important sanctions,” she wrote.

“To ensure the club can continue to compete and operate we are issuing a special licence that will allow fixtures to be fulfilled, staff to be paid and existing ticket holders to attend matches while, crucially, depriving Abramovich of benefiting from his ownership of the club,” she continued.

“I know this brings some uncertainty, but the Government will work with the league & clubs to keep football being played while ensuring sanctions hit those intended. Football clubs are cultural assets and the bedrock of our communities. We’re committed to protecting them,” Dorries wrote.

In total, Britain said the seven individuals added to the sanctions list have a collective net worth of $19.74 billion.

Russia has been hit with crippling sanctions that threaten to cast the country into its gravest crisis since the 1991 fall of the Soviet Union.

More than 2 million people have fled Ukraine since the invasion began two weeks ago, with NATO Secretary General Jens Stoltenberg describing the situation as “Europe’s fastest-growing refugee crisis since the Second World War.”