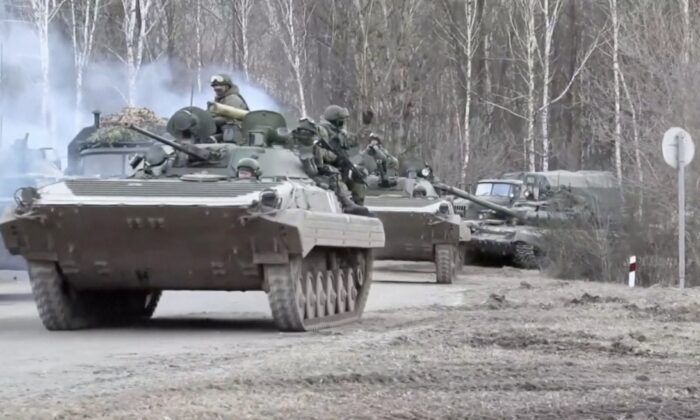 Speaking to reporters in a call, the official said it’s not clear how many have been recruited or if they have been sent to Ukraine as of Monday.

“We don’t know how many and how good they are and we couldn’t speak to the quality of each individual that they that they’re going to try to recruit or where they would get them from or how they would prepare them if they would even prepare them,” the official said, answering a question about reports Syrian fighters are being recruited.

“We think it’s noteworthy that [Russian President Vladimir Putin] indicated a willingness to rely on foreign fighters to fight the war in Ukraine,” said the official.

Over the weekend, reports from the Wall Street Journal and other outlets, citing anonymous U.S. officials, said that Syrians who are skilled in urban combat are being recruited by Moscow. Russia has been operating inside Syria since 2015, while the Kremlin has backed Syrian President Bashar al-Assad.

Since the Feb. 24 conflict started, there have also been reports of Russia’s military using Chechen soldiers. Ramzan Kadyrov, the head of Russia’s Chechen Republic, was seen in social media videos addressing hundreds, or possibly thousands, of soldiers in the capital, Grozny, in recent days.

Kadyrov said on Feb. 26 that his forces have been deployed to Ukraine, according to a video posted online. Several pro-Kyiv news outlets have also posted videos to social media that purportedly showed captured or dead Chechen prisoners of war.

“The president (Putin) took the right decision and we will carry out his orders under any circumstances,” said Kadyrov at the time.

Meanwhile, fighters have poured in from Western countries to fight on behalf of Kyiv’s government, according to Ukrainian President Volodymyr Zelensky. Last week, Zelensky said in a news conference that some 16,000 foreign nationals signed up to fight against Russia, although the figure could not be independently verified.

Putin, via state-run media, claimed last week that Ukrainian forces were using human shields as well as “foreign mercenaries” from the Middle East on the ground.

“The fact that we are fighting specifically against neo-Nazis is shown by the very course of hostilities. Nationalist and neo-Nazi formations, and among them there are foreign mercenaries, including those from the Middle East, are hiding behind civilians as a human shield,” Putin said. He did not elaborate or provide an example.

More than 1.7 million Ukrainians fleeing Russia’s invasion have so far crossed into Central Europe, the United Nation’s refugee agency said on Monday, as thousands more streamed across the borders.

Poland, which has the largest Ukrainian community in Central Europe, has received more than 1 million Ukrainian refugees since the conflict began, with the milestone passed late on Sunday.

“This is a million human tragedies, a million people banished from their homes by the war,” the Polish border guard service wrote in a Twitter post late on Sunday.

Zachary Stieber and Reuters contributed to this report.