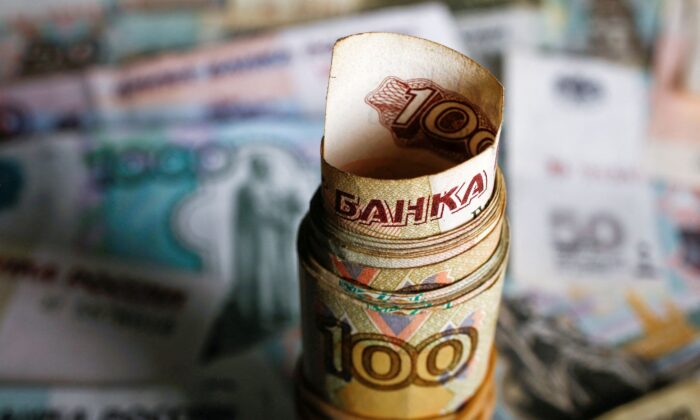 Russia’s finance ministry is preparing to service some of its foreign currency debt on Wednesday, but such payments will be made in roubles if sanctions prevent banks from honoring debts in the currency of issue, the ministry said on Monday.

“Is that a default? … From Russia’s point of view, we are fulfilling our obligations,” Finance Minister Anton Siluanov said in an interview with state TV aired on Monday.

Western sanctions over events in Ukraine have cut Russia off from key parts of global financial markets and have frozen nearly half of the country’s $640 billion gold and FX reserves, triggering the worst economic crisis since the 1991 fall of the Soviet Union.

Siluanov said Russia has to pay coupons on its Eurobonds on March 16 and has already asked Western banks to carry out the transaction.

But should a major part of Russia’s reserves be frozen, the payment could run into “particular challenges” as the possibility of those payments going through would depend on sanctions.

The government is due to pay $117 million on two of its dollar-denominated bonds on Wednesday.

“If we see complications with executing the order then on Tuesday we will prepare a relevant transfer order in the rouble equivalent,” Siluanov said in the TV interview.

Russia has the necessary funds to service its external obligations and may also use a yuan part of its gold and forex reserves if there is such a need, he said.

Several Russian banks have been banned from the SWIFT international payments network, hampering efforts to move money outside of Russia.

“The freezing of the central bank and the government’s foreign currency accounts can be seen as a desire by several Western countries to organise an artificial default,” Siluanov said.

The Chinese currency accounted for 13.1 percent of the Russian central bank’s foreign currency reserves in June 2021, compared with just 0.1 percent in June 2017, with Moscow’s dollar holdings dropping to 16.4 percent from 46.3 percent in the same period.

China is Russia’s top export market after the European Union. Russian exports to China were worth $79.3 billion in 2021, with oil and gas accounting for 56 percent of that, according to China’s customs agency.

Original link : Russia Says It May Have to Service Foreign Exchange Debt in Roubles Due to Sanctions