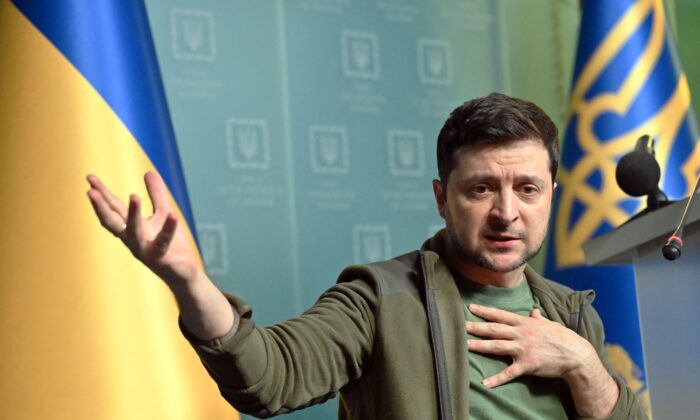 Ukrainian President Volodymyr Zelensky has said that Russia is preparing to bomb Odessa, a strategically important port city in southern Ukraine with a population of nearly one million.

“They are preparing to bomb Odessa. Odessa!” said the Ukrainian President of the Black Sea city in a video message on Sunday.

“It will be a war crime. It will be a historical crime,” he stressed while calling on Russian people to make a choice “between life and slavery.”

Since then, Russian forces have overrun the city of Kherson, a key port on the Black Sea and the Dnieper River, and shelled the port of Mariupol, even as Ukrainians attempted to flee via humanitarian corridors set up for civilians to evacuate.

Multiple other cities have been bombed and shelled, and the United Nations believes that around 1.2 million people have fled Ukraine as the war continues.

However, Russian forces have been met with strong resistance from the Ukrainian military, especially on the outskirts of the Ukrainian capital of Kyiv.

Moscow’s military forces have also so far not taken Odessa, a cosmopolitan harbour on Ukraine’s southern coast and the country’s fourth-largest city which is home to both Ukrainian and Russian speakers and Bulgarian and Jewish minorities.

However, local residents and officials are expecting an attack soon as some Russian troops advance west towards Kherson, which is on the road towards Odessa.

Strategically, taking over Odessa would allow Russia to cut Ukraine off from the sea, effectively leaving a country that relies heavily on exports via the sea landlocked, and create a land bridge with Crimea and the Russian-occupied region of Transnistria.

Russian officials have not commented on whether they plan to attack Odessa.

“It has been in the air for days now that the possibility is there—that the Russian forces that have been extending their gains north of Crimea, through Kherson and onwards through the town of Mykolaiv, may well try to double back on Odesa and join up with a naval landing from elements of the Black Sea fleet that have been hovering on the horizon there for several days,” Al Jazeera’s Jonah Hull said.

“That’s been talked about—whether Zelenskyy is referring to specific intelligence or not it’s not clear,” Hull added.

Elsewhere, Russia and Ukraine are set to hold the third round of negotiations on Monday, Ukrainian negotiator David Arakhamia, who is also the parliamentary faction leader of Ukrainian President Volodymyr Zelensky’s party, announced in a Facebook post.

Both countries agreed in the second round of negotiations on Thursday to establish humanitarian corridors which would allow for civilians to safely evacuate Mariupol and Volnovakha.

However, the evacuation of Mariupol was halted after Russian forces allegedly breached the ceasefire.

The Mariupol City Council said Saturday in a statement on Telegram that the evacuation has been postponed and called on residents to seek safety in bomb shelters.

“Due to the fact that the Russian side has not adhered to the ceasefire agreement and continues shelling Mariupol and its surroundings, for security reasons the evacuation of the population is postponed,” the council said.

During his video message on Sunday night, Zelensky called for peace and told the people of Russia, “this is the time when you can still win over the evil.”

“We are Ukrainians. We need peace. We want peace. And for Russian citizens, it’s not only the fight for peace in Ukraine but for your peace and for your freedom. You used to see it. You knew prosperity … If you will be silent now, then only your poverty will speak for you”, Zelensky continued.