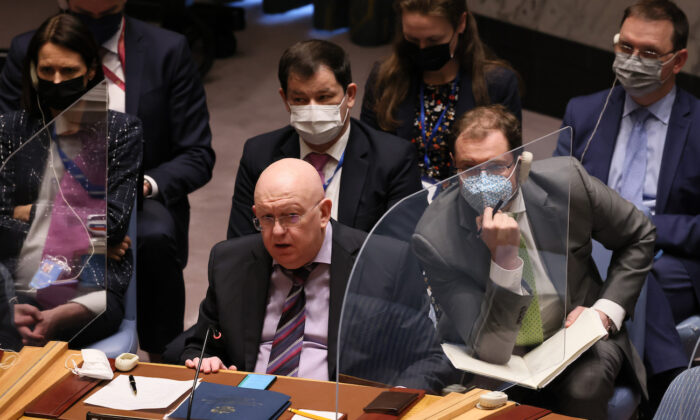 Dmitry Polyanskiy, first deputy permanent representative of Russia to the United Nations, said in a Twitter post on March 10: “Russian Mission asked for a meeting of #SecurityCouncil for 11 March to discuss the military biological activities of the US on the territory of #Ukraine.”

Reuters reported that diplomats have indicated the U.N. Security Council will convene on Friday, March 11, to discuss Moscow’s claims of U.S. biological activities in Ukraine.

Late on March 9, the United States denied Russian accusations that Washington is running labs in Ukraine geared toward developing bioweapons.

Russia on March 8 repeated its longstanding accusations the United States is working with Ukrainian laboratories to develop biological weapons.

The United States and Ukraine maintain that the laboratories seek to prevent bioweapons and pathogens, not develop them. Ukraine, like many other countries, has public health laboratories researching how to minimize the threats of dangerous diseases affecting humans and animals.

Fact sheets featured on the U.S. Embassy of Ukraine website, found via Internet Archive, link to several documents detailing what appears to be U.S. government investments for select laboratories in Ukraine.

Under Secretary of State for Political Affairs Victoria Nuland on March 8 said Ukraine has “biological research facilities” and the United States is working to prevent Russians from taking control of them.

In a statement released on March 9, State Department spokesman Ned Price said Russia “is inventing false pretexts in an attempt to justify its own horrific actions in Ukraine.”

Separately, the World Health Organization (WHO) said in an interview with Reuters on Thursday that it “has strongly recommended to the Ministry of Health in Ukraine and other responsible bodies to destroy high-threat pathogens to prevent any potential spills.”