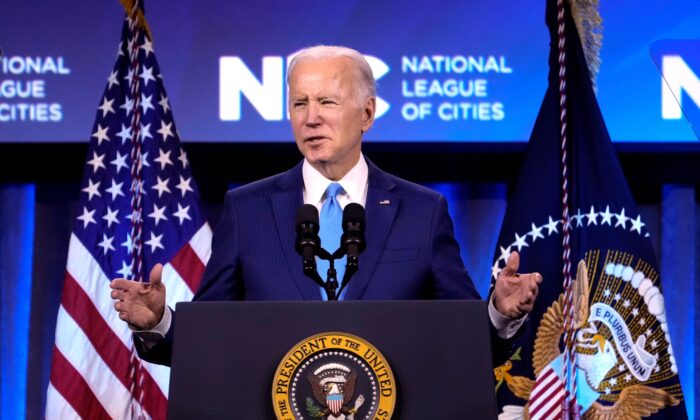 Russia has announced sanctions against U.S. President Joe Biden, Secretary of State Antony Blinken, and a list of other top-ranking U.S. officials and well-known American figures in a tit-for-tat exchange with the West amid the ongoing war in Ukraine.

In a statement Tuesday, the Russian Foreign Ministry said that, in response to unprecedented U.S. sanctions against Russia, a list of Americans will be “included in the Russian ‘stop list’ on a reciprocal basis as of March 15 of this year,” according to the statement translated by Interfax.

The announcement comes in response to sanctions against Russian financial systems and individuals in Russian President Vladimir Putin’s inner circle the United States put in place following the Russian invasion of Ukraine on Feb. 25.

The United States has also announced a ban on Russian oil and, along with other Group of Seven (G-7) nations, moved to end Russia’s normal trade relation status, making it more difficult for Russia to do business with the West.

U.S. officials have pointed to the devaluing of the Russian Ruble as well as the Russian stock market remaining closed as evidence of the effectiveness of sanctions.

Russian Foreign Minister Sergei Lavrov expressed confidence to reporters Tuesday that Russia will “find a way to eliminate” its economic dependence on the West.

“We will make sure we never find ourselves in a similar situation and that neither some Uncle Sam nor anybody else can make decisions aimed at destroying our economy,” Lavrov said.

As a joke, Clinton tweeted “I want to thank the Russian Academy for this Lifetime Achievement Award” following the announcement from the Kremlin.

Peace talks between Russian and Ukrainian delegations restarted Tuesday after a pause on Monday, according to Ukrainian presidential adviser Mykhailo Podolyak.