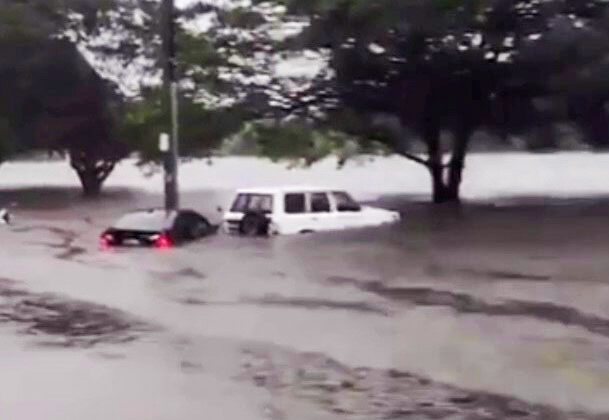 Due to an East Coast low-pressure system, the Bureau of Meteorology issued a severe weather warning on Monday night for a broad area in New South Wales between Taree and Bega, with conditions set to worsen overnight in regions including the Mid North Coast, Hunter, Sydney, Illawarra, and South Coast.

The prediction was accurate, with Sydney seeing 50 to 150 millimetres of rainfall on Monday night, resulting in severe flash flooding and hence new evacuation orders or warnings being issued for several areas of Sydney on Tuesday, including suburbs around Manly Dam, Mulgoa, Penrith, Regentville, Cranebrook, and Wetherill Park.

Residents in low lying areas below and downstream from the dam were asked to prepare for evacuation, including parts of Manly, Manly Vale, North Manly, and Brookvale.

Mackellar Girls High School, which is located in a low lying area of Manly Vale and close to a distributary of Manly Dam, saw its ground floor classrooms flooded, while the car park and oval across the road were completely inundated.

A year nine student of the school told The Epoch Times that when she arrived at school in the morning, only a small part of the oval across the road was flooded, but none of the car park.

However, by the afternoon, “the cars were almost completely submerged, and I saw one float away,” she said.

She added that the ground floor classrooms of the school were flooded with water reaching the shins of students.

Meanwhile, an SES spokesperson said that there was major flooding along the Georges River overnight, and although it appears to have peaked, there is still moderate to near major flooding around the suburb of Liverpool.

The Hawkesbury River is also experiencing major flooding, impacting Windsor, Sackville and North Windsor, where levels have exceeded those of last week.

SES are asking residents near waterways connected to the Hawkesbury and Nepean Rivers to stay up to date with the latest warnings.

Rainfall over Sydney is forecast to ease late on Tuesday afternoon, but as the low-pressure system continues to move south, isolated falls in excess of 100 millimetres are expected in the Illawarra and South Coast areas of NSW.

While rain is set to ease there later tonight, a severe weather warning is still in place from the Hunter region down to the South Coast, which includes Sydney.

Damaging winds are forecast, with gusts in excess of 90 kilometres per hour expected, and the SES spokesperson warned that travel is not currently advisable, not only because of the rainfall and flash flooding, but also the risk of falling trees and power lines, in addition to potential landslides.