Queensland May Mandate Restrictions to Prohibit Unvaccinated From Venues 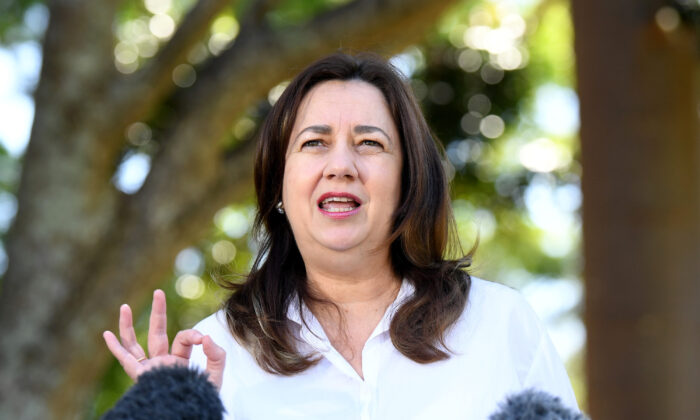 Queensland Premier Annastacia Palaszczuk may follow other states in mandating restrictions for unvaccinated people via health orders, prohibiting them from venues and premises in the coming months.

This comes as the Australian state prepares to lift restrictions for fully vaccinated people in line with its plan to reopen the state on Dec. 17.

“What we will see in the future across Australia may be, until the vaccination levels are consistent across the nation, you will see some measures we’ll put in that only vaccinated people will be able to go to certain venues,” she told reporters on Friday.

“You’re seeing that in New South Wales and Victoria at the moment.

“I don’t want to pre-empt what’s happening in Queensland, but you could see businesses do that, you could see large festivals, for example saying to young people: ‘You can only come here if you are vaccinated.’

“So it’s in everyone’s interest to get vaccinated.”

From Nov. 1, states and territories began lifting COVID-19 restrictions on international and domestic travel in line with a national plan.

But Queensland has opted instead to follow its own plan that sees it keeping some restrictions in place for longer, based on vaccination rates, while other states drop theirs.

Queensland’s interstate borders remain closed until Dec. 17. But international arrivals will still need to quarantine until the state reaches its 90 percent vaccination milestone.

International arrivals into NSW and Victoria will need to prove they’ve received a vaccine approved by the rapeutic Goods Administration and pass a COVID-19 PCR test before they board their flight.

For now, only Australian citizens, permanent residents, their immediate family members, some New Zealanders and those with appropriate visas are allowed to fly to Australia from overseas.

Overall, 66.3 percent of eligible Queenslanders are fully vaccinated, and 79.1 percent have had one dose.

However, Indigenous vaccination rates are lagging in the state, with 52 percent of Aboriginal and Torres Strait Island people aged over 16 having had one jab and 38.9 percent being fully vaccinated.

He called for the government to improve access to vaccines and to go into Indigenous communities to spruik the jab.

“We’ve got to give people the confidence to get the jab, and I’ve seen some of the nonsense that’s on social media, and it’s running through these Indigenous communities,” he said.

Pezou : Queensland May Mandate Restrictions to Prohibit Unvaccinated From Venues