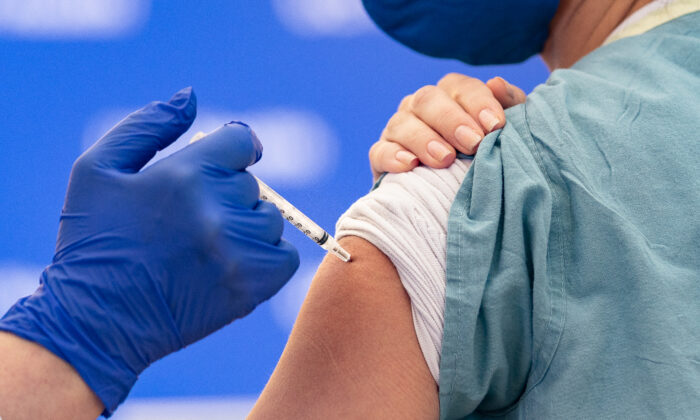 A man who went to get a COVID-19 vaccine pushed a medical staffer’s hand away and injected himself with the vaccine. He has since been fined for disorderly behaviour, NT News reported.

According to NT Police Commissioner Jamie Chalker, on Tuesday morning, a man who had gone to receive his COVID-19 vaccine in Coolalinga, 29 km southeast of Darwin, became agitated.

“A gentleman appeared there, indicating that he was not overly happy with the process and that caused a bit of a disturbance,” he said.聽“He pushed one of the hands away of one of our staff and grabbed the needle and injected himself with the vaccine.”

Chalker called the behaviour inappropriate and not something that should be tolerated. He added that the man had been issued with an infringement notice for disorderly behaviour.

“Again, vaccination staff are there to help you. y shouldn’t have to be subjected to that type of behaviour. It just cannot be tolerated,” Chalker said.

However, the NT News reported that the man alleged nursing staff became upset after he wrote in his vaccination consent form ‘Under Duress.”

man reportedly told the NT News that he did not assault anyone and did聽not push the health staff hand away.

He also said that the nursing staff took three steps back when he grabbed the needle to inject himself.

Meanwhile, three new COVID-19 cases have been recorded in the Northern Territory in the past 24 hours, one of whom is an infant from Robinson River, Chief Minister Michael Gunner said at a press conference on Tuesday.

infant is a child of an earlier COVID-19 case in Robinson River and has been transferred to Darwin Hospital for care.

other two cases are a man in his forties and a woman in her twenties. man was identified as a close contact on Nov. 15 and had twice tested negative while at the Centre for National Resilience on the outskirts of Darwin, but has since tested positive. He has had the first jab.

woman is from the Binjari community and was taken to a Katherine hospital on Monday with symptoms, where she tested positive. She is unvaccinated.

Gunner also announced that one of the positive cases from Monday is an employee of the Director of Public Prosecutions in Katherine who is fully vaccinated.

This means fully-vaccinated residents are permitted to live normally within the lockout area. In contrast, unvaccinated residents must stay home and are only allowed to leave for medical treatment, essential goods and services, essential work, one hour of exercise within a 5-km radius of home, and to聽provide care and support to a family member or person who cannot support themselves.