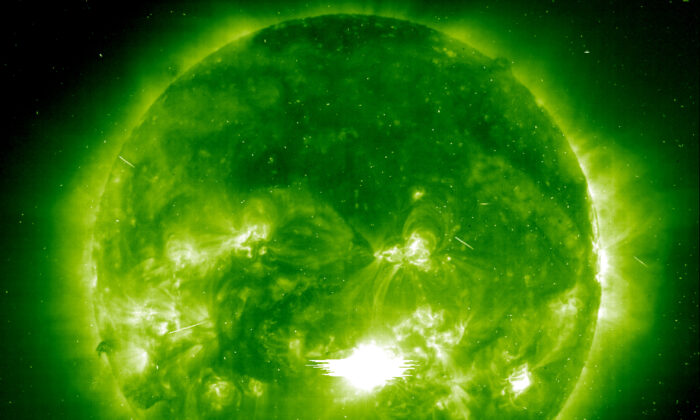 The Space Weather Prediction Center issued a geomagnetic storm watch on March 13, noting that mild solar storms are expected to hit earth this week due to “possible effects from the arrival of coronal mass ejections on March 10.”

Geomagnetic storms occur when a large burst of solar wind interferes with the Earth’s magnetic field.

The agency, which is run by the U.S. National Oceanic and Atmospheric Administration (NOAA), said that “moderate” and “minor” geomagnetic storms will hit Earth from March 14, which were classified as G1 and G2 on the five-level solar storm scale.

The British Met Office also issued an advisory on Tuesday saying that solar activity has been moderate over the past 24 hours.

“There is a large but stable region which will be rotating off the Earth-side of the disc towards the end of March 15,” it stated. “There is one slow, weak coronal mass ejection observed on March 13 which may give a glancing blow at Earth on March 17, but with low confidence.”

The Met Office said the best chance of seeing the aurora borealis, or northern lights, is in the northern parts of Scotland, with chances declining in the United Kingdom. It noted that aurora sightings are “still likely at high latitudes” through Tuesday.

“The count rate of energetic particles (high energy protons) is forecast to be at background levels with no solar radiation storms, although there is just a very slight chance of an increase in response to any larger flares that may occur,” it stated.

According to the United States Geological Survey, satellite electronics can be damaged during geomagnetic storms due to “the build-up and discharge of static electric charges.” Astronauts and pilots flying at high altitudes may also be exposed to “increased levels of radiation.”

“Because the ionosphere is heated and distorted during storms, long-range radio communication that relies on sub-ionospheric reflection can be difficult or impossible, and global-positioning system (GPS) communications can be degraded,” it stated.

University of California Irvine Assistant Professor Sangeetha Abdu Jyothi warned in September last year that a solar “superstorm” directed at Earth could prompt an “internet apocalypse” across the entire globe that could last for several months.

According to Jyothi’s research, power grids, oil and gas pipelines, and networking cables are the most vulnerable to the impacts of geomagnetically induced currents, while submarine cables, which span hundreds or thousands of kilometers, are even more vulnerable than land cables, due to their larger lengths.

“The U.S. is one of the most vulnerable locations with a high risk of disconnection from Europe during extreme solar events. Intra-continental connections in Europe are at a lower risk due to the presence of a large number of shorter land and submarine cables interconnecting the continent,” the report notes.

Katabella Roberts contributed to this report.