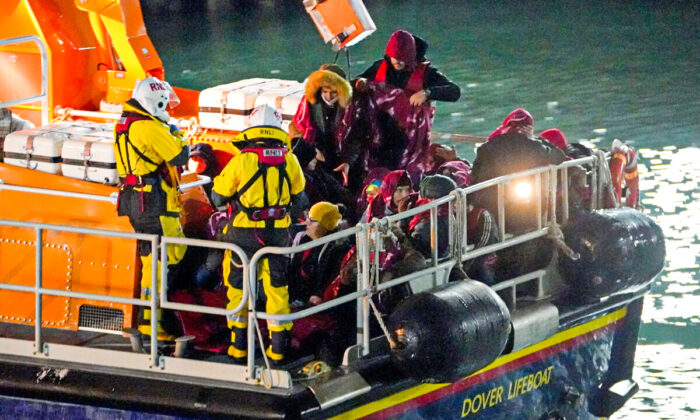 More people have reached the British shore on Thursday after the deadliest day for migrants in the English channel.

Downing Street said it illustrated the need to step up the work to dismantle the human trafficking trade between the UK and France.

French President Emmanuel Macron said he will ask the UK to provide “extra help” as the migrants are determined to go to the UK.

A group of people wearing life jackets and wrapped in blankets were seen huddled together onboard a lifeboat before disembarking in Dover on Thursday morning, just a day after a dinghy capsized off the coast of Calais, causing the loss of dozens of lives.

French officials previously stated there were 31 deaths but the death toll was revised down to 27, with no immediate explanation for the discrepancy.

French interior minister Gerald Darmanin said the dead included five women, one of whom was later reported to have been pregnant.

He also said two survivors—one Somali and one Iraqi—were being treated in a French hospital for severe hypothermia.

identities and nationalities of the victims are yet to be determined.

Darmanin told French radio network RTL on Thursday that smugglers have sadly been promising migrant’s “Eldorado in England” for a few thousand euros “every day for the last 20 years.”

Commenting on the arrival of more illegal immigrants after the tragedy, Prime Minister Boris Johnson’s spokesman said, “It illustrates that we absolutely need to step up our work with our French counterparts to dismantle this horrific trade which preys on vulnerable people.”

“It demonstrates that it is still ongoing despite the horrific tragedy we saw yesterday, and more needs to be done,” he added.

Asked if Home Secretary Priti Patel would raise the prospect of joint patrols on French beaches when speaking to her French counterpart, Johnson’s spokesman said it “would be fair to say that how we can provide more personnel and resource is something we would want to discuss, absolutely,” adding that there’s “recognition on both sides that more can be done and more needs to be done urgently.”

Johnson has said on Wednesday that he hoped the French would now find the renewed offer to jointly patrol the French coast “acceptable.”

But Pierre-Henri Dumont, the MP for the French port city of Calais, said increasing patrols “will not change anything.”

MP said there’s no point throwing more resources into patrolling because there is a “200–300km [124–186 miles] of shore to monitor 24/7” and it only takes a few minutes for smugglers to evade the patrol.

Asked what should be done, he said migrants should be allowed to apply for asylum while outside the UK but that it should be “harder” to find employment or housing when they arrive.

UK’s immigration minister Kevin Foster told the BBC on Thursday morning that the UK is happy to provide more resources to the French than the £54 million ($72 million) agreed upon.

And Macron said he will ask the UK to provide “extra help” as the migrants are determined to go to the UK.

“All these men and these women don’t want to stay in France. We tell them they’re obviously able to do so, and there are centres in Calais and Dunkirk where they can go,” he said on Thursday, adding that the government will “reinforce in fact saving them at sea,” cooperate with the UK and surrounding European countries to stop the gravy train of human trafficking.

Found among a group of men sheltering across from a supermarket in Grande-Synthe, France, waiting to be picked up to go to the UK, 23-year-old Iraqi man Ali told PA new agency that the migrants who drowned on Wednesday “had no chance to pass” the English Channel, adding “but we maybe do.”

Ali said there’re migrants there who arrived via Turkey and Belarus.