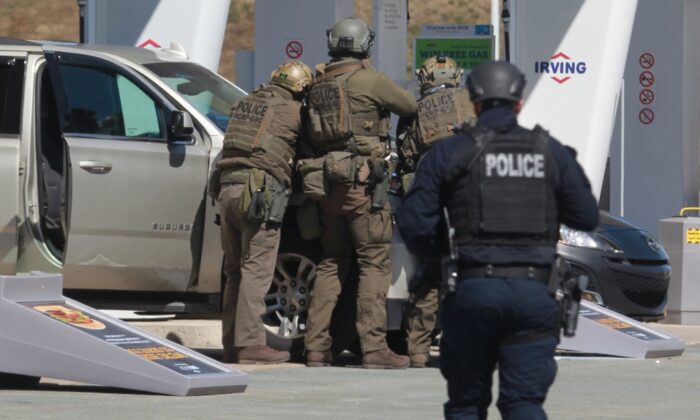 A close relative of the man who disguised himself as a Mountie and fatally shot 22 people in Nova Scotia says the killer was a lifelong scammer and opportunist raised in a deeply dysfunctional family, newly released documents say.

Chris Wortman, a former Mountie who was the gunman’s uncle, told police soon after the killings in April 2020 that he wasn’t surprised when he learned his nephew, Gabriel Wortman, was responsible for Canada’s worst mass shooting.

“I knew he was always capable of killing somebody or (causing) serious harm,” he told RCMP Sgt. Cory Kilborn during an interview in Invermere, B.C., on April 28, 2020—nine days after the killings.

“I always thought, well maybe (he would kill) his parents or maybe (Lisa Banfield, his common-law wife) … I just didn’t think he’d go on a rampage.”

The federal-provincial inquiry investigating the tragedy released the documents on Friday. Its public hearings, which started last month, have been adjourned until March 28.

During the police interview, Chris Wortman said he was about seven years older than his nephew, and he recalled how the pair practically grew up together in eastern New Brunswick.

“He was always kind of a strange little guy, never known to have a friend,” he said. “He had a difficult upbringing …. (His parents), they’re very bizarre, very strange. And, as a result, Gabriel was, too … There’s a lot of dysfunction.”

The former Mountie confirmed an ugly story that Lisa Banfield shared with police after the killings, saying he recalled how Gabriel’s father had once placed a .22-calibre gun in his seven-year-old son’s hand and told him: “Shoot me!”

As well, he said he was aware of Gabriel Wortman’s previous plans to kill his parents, which weren’t carried out, and his severe beating of his father during a trip to the Dominican Republic years ago.

Chris Wortman said his nephew was estranged from the rest of his family and didn’t have any friends, though he was “good with people” and had made a small fortune as a denturist in Dartmouth, N.S.

But he also corroborated published reports suggesting his nephew was a low-level “career criminal” who sold smuggled U.S. cigarettes and alcohol to pay for his education, but was never caught. He said he learned of the crime after he retired from the national police force.

The former RCMP officer said he had visited his nephew and his longtime girlfriend several times when he and his wife were living in P.E.I., between 2014 and 2018, but he said the couple decided to leave the region to avoid ongoing family infighting.

“I was the only one he associated with, and then when he and I went flat, he had nobody,” he said, adding that Gabriel Wortman had not spoken to his parents for the past six or seven years.

“It’s just my sixth sense … that spider sense of a police officer. I just knew that I had to get my distance.”

He recalled how his nephew’s mother once showed up at the denture clinic, where she asked her son to fix her dentures. “He said, ‘I’ll do it, (but) after that I never want to see you again,’” Chris Wortman said in the police interview.

Asked by Kilborn if he had been following news about the killings, Chris Wortman said he was aware of what had happened, including reports that his nephew had set fire to several homes in Portapique, N.S., after killing 13 people there.

“I thought that’s totally him,” he said. “I just know how he plans things and how meticulous and thorough he would be … It just seems like … he was finalizing everything.”