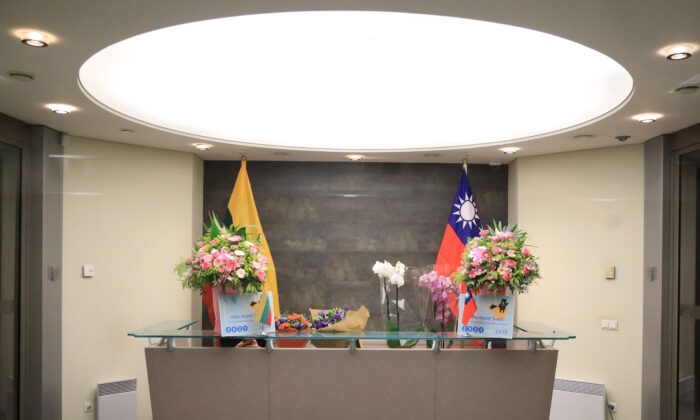 TAIPEI/VILNIUS—Taiwan’s leadership will host a group of Lithuanian lawmakers next week amid a deepening spat between Beijing and Vilnius about the Baltic state’s decision to allow the self-ruled island to open a de facto embassy.

Beijing downgraded diplomatic ties with Lithuania on Sunday in a show of anger over the de facto embassy move. Chinese communist regime claims the island as its own, despite the fact that Taiwan is a de facto independent country, with its own military, democratically-elected government, and constitution.

Taiwan’s Foreign Ministry said on Wednesday that Matas Maldeikis, leader of the Lithuanian parliament’s Taiwan Friendship Group, would visit Taipei to attend a legislative forum on Dec 2–3, along with some colleagues and lawmakers from Latvia and Estonia. In all, 10 representatives from the three Baltic states will be participating.

group will meet Taiwan President Tsai Ing-wen along with other senior officials, the ministry added.

Maldeikis told Reuters that the six Lithuanian lawmakers traveling to the island would represent both government and opposition parties, and include a lawmaker who was sanctioned by the Chinese regime in March.

“We want to send a signal to Taiwan that it has friends in this part of the world,” said Maldeikis, adding that the Baltic lawmakers had also been invited to meet Taiwan’s prime minister and speaker of parliament.

Qu Baihua, the charge d’affairs at the Chinese embassy in Vilnius, said the lawmakers’ trip was “not a correct action.”

“By visiting Taiwan, you just send a wrong message to Taiwan,” he told reporters on Wednesday. “We oppose that, and hope they refrain from doing that.”

Beijing had already expressed its anger this summer with the Vilnius government—which has formal diplomatic relations with China and not Taiwan—after it allowed the island to open an office in Lithuania using the name Taiwan.

Other Taiwan offices in Europe and the United States use the name of the city Taipei, avoiding reference to the island itself. However, the Taiwanese Representative Office in Lithuania finally opened last week.

Washington has expressed its concern about the Chinese regime’s reaction and offered Vilnius support to withstand Chinese pressure.

Only 15 countries have formal diplomatic ties with Taiwan.

By Ben Blanchard and Andrius Sytas

Pezou contributed to this report.