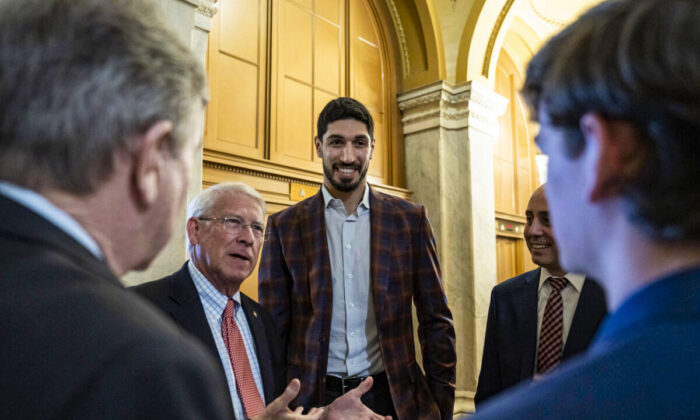 Newly-ousted NBA player Enes Kanter Freedom is accusing the basketball league of being “hypocrites” for showing solidarity with Ukraine while remaining silent on the Chinese regime’s human rights atrocities.

The former Boston Celtics center, who recently received a nomination for his Nobel Peace Prize for his rights advocacy, is currently without a job for the first time in his 10-year professional basketball career—a result, he said, of him speaking up against the Chinese Communist Party.

But if his old team had been less eager to demonstrate its stance on China, the Celtics showed no reluctance in making clear its support for Ukraine.

“I see Celtics coaching staff wearing Ukrainian flag pins, which I support. What about Syria, Afghanistan, Uyghurs, Hong Kong, Tibet, Taiwan,” he asked. “Why is it okay to speak up about human rights violations there but not in other countries? Is there not much profit from Russia?”

Why is it okay to speak up about human rights violations there but not in other countries?

Is there not much profit from Russia? pic.twitter.com/yhcmS3pefT

The team’s swiftness in backing Ukraine appears to stand in contrast with its handling of Freedom’s advocacy efforts last year, when he started wearing shoes with political messages to call out human rights abuses around the world, especially China. Those in his collection featured slogans such as “Free China,” “Taiwan belongs to the Taiwanese people,” and “Stop Organ Harvesting in China.”

The Celtics had “begged” him not to wear the shoes and threatened to ban him, Freedom previously said.

His activism did not go unnoticed by the Chinese regime. After Freedom criticized Beijing’s repression in Tibet last October, Tencent, NBA’s exclusive Chinese digital partner, excluded the Celtics from broadcast and made its games available in text and images only. The blackout has continued through today.

Freedom was traded from the Celtics to Houston Rockets on Feb. 10, but released shortly after.

“To be honest, it is a lonely road—I’m talking about in a sports world,” he said a week later at an awards ceremony that recognized his activism.

“You can talk about all the social justice, all the injustices happening all around the world. But when it comes to China, you cannot speak up. If you do, then you’d have to face the consequences.”

Since Russia invaded Ukraine two weeks ago, Freedom has fully stood with the beleaguered nation. On Feb. 24, the day Moscow launched the attack, a pair of shoes in Ukrainian flag color appeared on his Twitter, depicting a dove and an olive branch, the universal peace symbol. “Freedom to Ukraine,” reads the message on the bottom.

The NBA and Celtics did not respond to queries from The Epoch Times by press time.