‘It’s About Being United’: Participants Share Their Reasons for Joining Freedom Chain 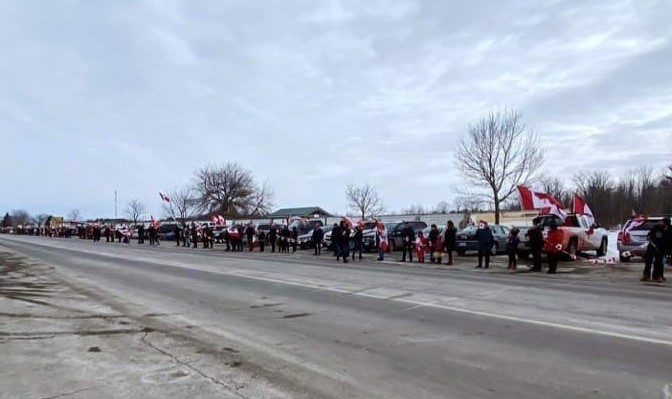 In a show of unity and love toward their fellow Canadians, thousands across the country, from Victoria, B.C., to Corner Brook, Newfoundland and Labrador, celebrated the inaugural event of the Freedom Chain 2022 movement on March 5.

First envisioned during the summer of 2021, organizers volunteered and collaborated during the past several months in a group effort to bring people together and emphasize love and fellowship among Canadians and throughout the world.

The event was marked by people holding hands to form a human chain, largely across portions of the Trans-Canada Highway, for example from one family in Goldstream west of Victoria to thousands reported through to Salmon Arm, B.C., and from Belleville to Havelock and on to Peterborough, Ontario.

The Freedom Chain 2022 was truly a national experience, with representation across virtually every province.

Teresa Sinclair joined hands with others in Winnipeg, Manitoba, and made an emotional post on her Facebook page.

“I think it’s safe to say that the freedom chain was a success,” she said. “I’m not going to lie I’m getting a little bit emotional seeing all these fabulous pictures and videos of so many of us freedom fighters getting together to join hand in hand literally coast to coast. This is just one reason why I am so incredibly proud to be Canadian. Because we really do come together.”

At the same time Sinclair was participating in Winnipeg, Sascha Pasternak was part of a massive group in the Shuswap region in B.C.’s southern Interior.

“You want to be on the right side of history, and that’s why I’m going to keep supporting, every time, when it comes out to all of these different villages. And I just want to be out with the people. That is good. I feel the love of God, and it’s a great thing,” Pasternak told The Epoch Times.

Leaders of Freedom Chain 2022 emphasize that the decision to hold the event is unrelated to recent rallies across the country, including the Freedom Convoy earlier this year, which saw thousands of truckers and their supporters converge in Ottawa.

The Freedom Chain was designed as a standalone opportunity to encourage Canadians to show love across the country, they say, and the leaders of the different regions asked to remain anonymous because they didn’t want personal egos to overtake the message.

“It’s about the country, it’s about the world, it’s about everybody coming together,” one of Ontario’s organizers told The Epoch Times. “It’s just about being united, being peaceful and loving each other for who we are and not the choices that we make. And I’m just a Canadian who’s pulling people together, giving them a place to go.”

‘Standing Shoulder to Shoulder in Freedom’

The same message was echoed on Vancouver Island by a Freedom Chain leader there, who offered an additional encouragement for people who may be losing hope because of COVID fatigue and other troubling world events.

“I want to stay true to our Freedom Chain, and we just want to show unity and freedom and love,” she told The Epoch Times. “It’s about holding the love and showing that we are loved and we are unified, and the government can’t take that away from every individual in this country. They can’t take it from the people in this world. They can’t mandate that out of us. And we need to show that.”

Another organizer brought experience from her time in Ottawa during the Freedom Convoy protest, where she witnessed the gathering of unity and love. She knew she would be able to rally the same spirit in B.C.’s South Okanagan region.

In an interview with The Epoch Times, she described the energy of the crowd under a clear, blue sky and warm, late-winter sun.

“Oh, my goodness, it was the most amazing turnout, and there was a huge showing nationwide as well,” she said. “It’s freedom, unity, and everybody’s standing shoulder to shoulder in freedom, a name that is right and is what it represents.

“We’ve been separated into a two-tier society, right? And one thing I learned from going down to Ottawa and meeting so many people on the ground there was this is not a movement of vaxxed versus unvaxxed. It’s not about that at all. We just want freedom.”

Several social media pages have been created for different regions across the country, including a national page to unify the movement. And while many followers are eager to hold more Freedom Chain events, future dates have not yet been officially announced.