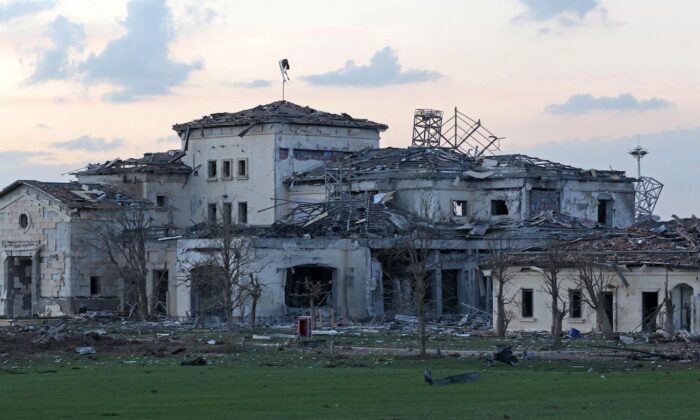 CENTCOM Commander Gen. Kenneth “Frank” McKenzie said March 15 that Iranian missiles that struck near a U.S. consulate in Iraq over the weekend were aimed at other targets.

McKenzie’s statements were made at a Senate committee hearing on CENTCOM, buttressing the State Department’s assessment of Iranian missile strikes that occurred in the late hours of March 12 in Erbil, a Kurdistan region of Iraq. His statements also come as U.S. and Iranian officials attempt to massage the final details of a nuclear treaty.

According to Kurdish officials, 12 ballistic missiles were fired into Erbil, wounding two civilians. As videos circulated online, national security experts noted that the heavy barrage of missiles indicated that they were launched by a nation-state actor, rather than a terrorist.

Just a day later, on March 13, Iran’s Revolutionary Guard claimed responsibility for the attack, which it said was in retaliation for Israel’s recent crimes, including an airstrike in Syria the previous week in which two Revolutionary Guard officers were killed.

However, the Fars News Agency, which is managed by Iran’s Revolutionary Guard Corps, appeared to suggest that the attack was linked to a January 2020 airstrike ordered by then-President Donald Trump, which killed the regime’s top Iranian military commander, Qasem Soleimani.

“Missiles hit the ‘Israeli-American’ bases at 01:20 local time; ‘that’s not a coincidence.’ IRGC-QF chief Soleimani was killed in #Iraq on 7Jan20—01:20 Iraq time,” the news agency wrote in a Twitter post.

While condemning Iran’s strikes, the State Department said March 13 that there’s no indication they were aimed at U.S. facilities.

“The strikes were an outrageous violation of Iraq’s sovereignty. No U.S. facilities were damaged or personnel injured, and we have no indications the attack was directed at the United States,” said State Department spokesperson Ned Price. “Iran must immediately cease its attacks, respect Iraqi sovereignty, and halt its interference in Iraq’s internal affairs.”

McKenzie, who is retiring from the U.S. military at the end of the month, made a similar assessment at the March 15 committee hearing.

“We don’t believe Iran actually targeted us,” he told committee members. “We believe they were aiming at other targets.”

McKenzie was pressed further on the matter. He indicated that he would provide more information at a closed-doors briefing set for later that day, but reiterated that Iran was not targeting American facilities with its recent missile strikes.

Meanwhile, negotiations on the Iran deal have reportedly stalled due to Russian demands about sanctions targeting Moscow in response to its ongoing invasion of Ukraine.

Speaking on March 5 about the negotiations, Russian Foreign Minister Sergei Lavrov cited the “avalanche of aggressive sanctions that the West has started spewing out” over Russia’s invasion of Ukraine, according to The Moscow Times.

Josep Borrell Fontelles, the European Union’s foreign policy chief, said in a March 11 Twitter post that, although negotiations were paused, “a final text is essentially ready and on the table.” He added that officials will continue to work to “overcome the current situation and to close the agreement.”

A member of Iran’s Supreme National Security Council said March 14 that negotiations will continue “until our legal and logical demands are met and a strong agreement is reached.”