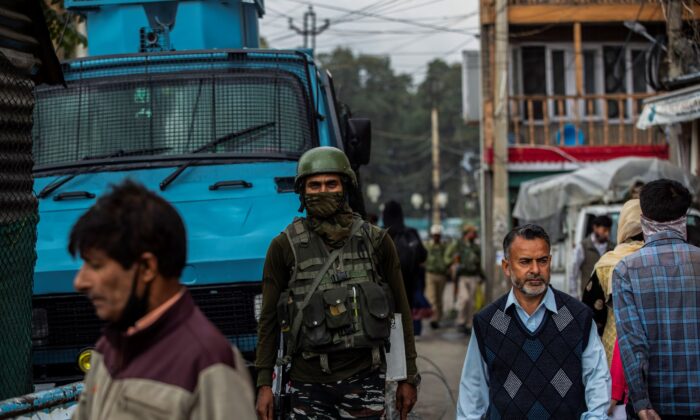 Residents said troops blasted one civilian house with explosives during the fighting, a common tactic by Indian troops in Kashmir.

In a separate clash on Tuesday, two suspected militants were killed inside an apple orchard during a counterinsurgency operation in the village of Feeripora, also in the southern Shopian district, police said.

On Monday, five Indian soldiers were killed in the deadliest gun battle with militants this year in a forested area of southern Surankote district. Lt. Col. Devender Anand, an Indian army spokesman, said troops continued with search operations in the area on Tuesday.

uptick in violence comes amid a sweeping crackdown by government forces in the Kashmir Valley following a string of targeted killings in the region鈥檚 main city of Srinagar last week. Police detained over 700 people for questioning after suspected militants shot and killed a prominent Kashmiri Hindu chemist, two schoolteachers of the Hindu and Sikh faiths, and a Hindu street food vendor from India鈥檚 eastern state of Bihar.

Police in a statement said one of the slain militants on Tuesday was involved in the killing of the street food vendor.

India and Pakistan claim the divided territory of Kashmir in its entirety.

Rebels in the Indian-controlled portion of Kashmir have been fighting New Delhi鈥檚 rule since 1989. Most Muslim Kashmiris support the rebel goal of uniting the territory, either under Pakistani rule or as an independent country.

India insists the Kashmir militancy is Pakistan-sponsored terrorism. Pakistan denies the charge, and most Kashmiris consider it a legitimate freedom struggle. Tens of thousands of civilians, rebels, and government forces have been killed in the conflict.