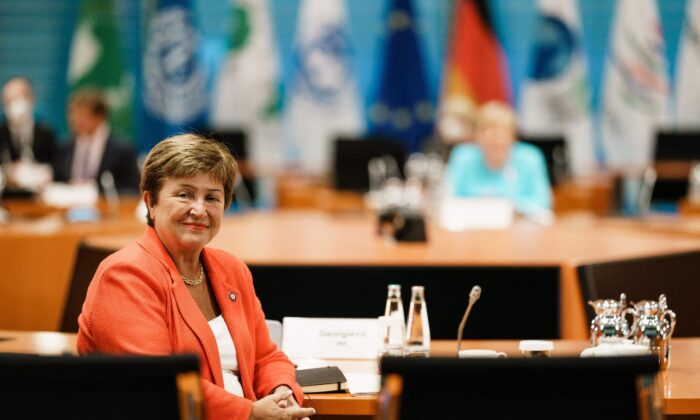 Georgieva told reporters she was encouraged by the IMF executive board’s consideration of a new Resilience and Sustainability Trust (RST) that would allow richer countries to donate or loan their share of the new Special Drawing Rights to more countries than just the low-income countries now eligible for such help under the IMF’s Poverty Reduction and Growth Trust.

IMF chief said the fund was also putting in place measures to increase transparency about the use of any SDRs.

Georgieva said members broadly supported the creation of the new RST trust during a nearly four-hour meeting of the executive board on Friday where IMF staff answered questions about potential criteria, financial arrangements, and the objective of the new trust.

“We want to be part of the solutions policymakers will have to make about long-term transformation on climate, but also beyond climate,” she said.

“We were so encouraged that that resonated across the board, and some of our members, in strong positions, starting indicating the interest to contribute to this new trust.”

Asked about reservations expressed by some critics that the new trust would overlap with the mandate of the World Bank, Georgieva said the fund was working closely with the multilateral development bank as it developed the new trust.

In fact, Georgieva said the IMF’s first presentation about the RST was to the board of the World Bank, and a large World Bank team participated in the presentation to the fund’s board.

German Finance Minister Olaf Scholz, in a statement prepared for Thursday’s meeting of the International Monetary and Financial Committee, a steering committee for the fund, called for a “clear delineation” of tasks between the fund and institutions like the World Bank, and said any new trust must be “carefully designed to avoid unintended consequences and drawbacks.”

He said the new trust should “neither induce facility shopping nor should it endanger members’ capacity to repay on regular fund programs.”

He also urged the fund to leverage the financial engagement of multilateral development banks, particularly in areas such as climate change and pandemic preparedness, areas that he said were predominantly in their scope.