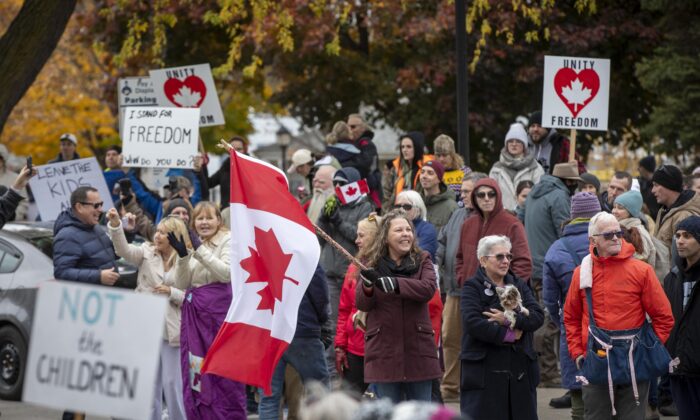 “Things don’t add up.” As a lawyer who has been writing, speaking, and litigating against lockdowns and now vaccine mandates these last 20 months, I have heard this sentiment countless times. Ordinary people who are being stripped of their normal lives—their jobs, sports, education, gatherings, travels, and medical services—have told me that the country is lost, that it is time to move their family, or simply that things are not right.

y are correct. Something is profoundly rotten in the state of Canada, and it is not just a virus. From the beginning, COVID was primarily dangerous to the elderly, as many respiratory viruses are, and particularly to those who had multiple serious underlying conditions and lived in institutional settings. According to an October report from Statistics Canada, 80 percent of all COVID-related deaths in the first wave occurred in long-term care facilities. For the young and healthy, the threat from COVID was no worse (and for the youngest, less bad) than the seasonal flu.

Yet instead of protecting the vulnerable elderly, our leaders chose to throw out established rulebooks on pandemic management and shut down all of society. Since then, as evidence mounts that COVID-19 vaccines have waning efficacy and do not stop transmission, governments and public health authorities have been doubling down to save face and avoid accountability for a plethora of bad decisions. A few lawyers have been trying to put things straight through legal challenges, but so far with little success.

Authorities have gone beyond mere incompetence, however. Since much of the public was not alarmed enough to justify coercive COVID rules, behavioural psychologists advising governments advocated the use of techniques to ramp up fear. Moral busybodies and authoritarians soon discovered they had more power than they had ever enjoyed before, issuing edicts and stamping out dissent. result is a society that no one recognizes. Families and friends have been torn apart. People are seriously discussing leaving the country, or have already taken steps to do so.

Perhaps the most disturbing element of the COVID debacle has been watching some people go mad. Belgian psychology professor Mattias Desmet describes the hypnotic fixation of a population on a false danger as “mass formation,” which he identifies as a precursor to totalitarianism. Unlike top-down dictatorship, totalitarianism arises from the masses themselves, who obsessively endorse extreme measures against an identified threat.

Mass formation, Desmet explains, occurs in populations lacking in meaning and feeling atomized (our Instagram world undoubtedly feeds this condition), and where there is already generalized anxiety. When media and government propaganda focus that anxiety on an external cause (COVID), people feel relatively more in control and disinclined to return to their ‘normal’ state. Roughly 30 percent of the population becomes almost hypnotized in this way, and narrowly focused on one thing to the exclusion of all else. This may explain why there is such a lack of compassion for those harmed by lockdowns or suffering vaccine injuries. herd instinct takes over and makes people feel like they are part of something—a great cause. Those who do not get on board are viewed as traitors to the cause and increasingly dehumanized.

good news is that another 40 percent of the population are simply “going along to get along” and might still be reached with rational argument. Desmet says one way to limit mass formation is to keep talking and presenting alternate perspectives. We may not change everyone’s minds with facts and arguments, but we need to keep interrupting the narrative. If we do not, Desmet warns, mass formation or hypnosis can take hold deeply and destructively and be more difficult to dislodge.

With this in mind, a group of lawyers, of which I am one, posted the Free North Declaration (www.FreeNorthDeclaration.ca) last week, setting out our concerns for the future of this country. declaration has now been signed by over 125 lawyers (some anonymous) and about 16,000 members of the public, with numbers rising steadily. We invite lawyers and concerned Canadians to read and endorse it.

While the declaration will not make our political leaders and the professional managerial class stop in their tracks, we hope it will keep a competing narrative alive in spite of the apparent consensus in the media, academic, professional, administrative, and political classes; and that it will provide an island of sanity so Canadians from all walks of life know that they are not alone in thinking that something is seriously amiss in their country.

Writing about life behind the Iron Curtain, Czech playwright (and later president) Václav Havel wrote that in totalitarian societies, it is necessary to create parallel structures devoted to truth-telling. Speaking the truth, no matter in what small way, casts an illuminating light on the darkness and begins to break through. “[I]ts power does not consist in its physical attributes but in the light it casts on those pillars of the system and on its unstable foundations,” Havel wrote in his essay “ Power of the Powerless.” Once totalitarian ideology is pierced, it disintegrates quickly.

Join us in continuing to speak out, in challenging the narrative, in embracing the freedoms we have been privileged to take for granted for so long, and in welcoming back our friends and neighbours with compassion and common humanity when the COVID bubble finally bursts.

Lisa Bildy is a litigation lawyer based in Ontario.

We are Canadian lawyers. In our country, civil liberties are under unprecedented attack. Governments, public health authorities, universities, public and private employers, municipalities, and businesses are trampling Canadians’ rights and freedoms. Our free society is at risk.Covid rules restrict citizens’ abilities to work, shop, travel and socialize. y erode civil liberties strategically, attempting to not run afoul of the law or to trigger protections in the Charter of Rights and Freedoms such as liberty and security of the person, the freedoms of association, assembly, expression, conscience, religion, and mobility rights. Where Covid rules appear to have violated the Charter, courts have deferred to the state to take whatever measures it deems necessary, whether demonstrably justifiable or not.

Legislatures have passed statutes that delegate broad discretionary powers to unelected public health officials, who then create draconian legal restrictions by fiat, without public scrutiny or open debate. se directives give private and public employers cover to suspend and dismiss workers who insist on their right to decide their own medical treatments. In our system of law, no principle is more important than the right to control your own body and to make your own medical and health decisions. An anxious populace, swept up in a deliberate campaign of fear, now believes that individual liberties upon which our liberal democracy is founded are dangerous and selfish. A growing collectivism that demands safety at the expense of autonomy shapes public policy.

Courts have embraced the pandemic narrative, some taking judicial notice of the nature of risks of the virus and safety of vaccines to adults and children. But the facts are anything but settled. Courts are supposed to be neutral. On Covid, as on any other contentious subject, their mandate is to find facts exclusively upon the evidence adduced by the parties in the courtroom. Instead, courts appear to have taken a side on Covid. Access to justice and the rule of law are now at risk. Unvaccinated persons are banned from juries, throwing into question the ability of all to obtain a fair trial heard by a jury of their peers.  Irrational policies born of panic affect no one more than disadvantaged communities who already suffer from lack of access to justice.

right to privacy and control of personal medical information has been abandoned. Disclosure of vaccination status is becoming a requirement for working, travelling, entering public and private establishments, crossing the border, and sometimes medical treatment. Those who cannot or will not disclose face aggressive social disapprobation. Vaccine passports create the infrastructure for a global digital surveillance system. Institutions that last year were prohibited from collecting individual medical history now demand it as a condition of employment or admission. University and college students are being denied their education for refusing to disclose their own medical choices.

Medical regulators have become dictatorial. y have warned doctors not to express medical opinions that might conflict with official Covid policies, effectively censoring them, and directed them not to certify grounds for medical exemptions from vaccination requirements, rupturing the physician-patient relationship and breaching the principle that only a practitioner who has examined a patient is equipped to give a diagnosis. Human rights commissions, which until recently championed expansive interpretations of human rights, have issued edicts narrowing grounds for accommodations.

Covid rules are inconsistent and irrational. Authorities enforce them selectively and preferentially, coming down hard on common people while turning a blind eye to the privileged. Covid vaccines do not prevent people from becoming infected or from transmitting the virus to others, but only unvaccinated persons are banned or required to undergo testing. People who have recovered from Covid and therefore have natural immunity are still subject to vaccination mandates even though the purpose of vaccination is to mimic natural immunity. Governments, public health authorities and employers advise that Covid vaccinations are safe, but pharmaceutical companies have been granted immunity from liability and no employers will accept legal responsibility for side-effects or adverse events, whether minor or serious, suffered by their employees who take a vaccine that they do not want. risks posed by Covid vaccines may be in dispute, but they are not zero. Particularly for children and healthy young adults, they may be riskier than the virus.

We fear the erosion of our free society. We question the single-minded fixation on a virus that poses little risk to most people. We protest the uncalculated harms that Covid policies are causing to people’s health, livelihoods, relationships, and mental states. We oppose the mass hysteria and anxiety that governments and the media are fuelling. Most of all, we object to the deterioration of our civil liberties and the failure of our legal institutions – legislatures, governments, administrative bodies, and courts – to protect them.

We are appalled by what is happening in our country. We call for the immediate end of vaccine passports and mandates. We propose a public inquiry into the handling of all aspects of the declared pandemic. Canadians should have control of their own lives and have the right to make their own decisions about their health, medical treatments, personal information, travels, and associations. Canada is supposed to be a free country governed by the rule of law. Restore it now or risk losing it for good.

Pezou : Free North Declaration Is an Island of Sanity in a Country Gone Mad