Fire Breaks out at Block of Flats and Offices in London 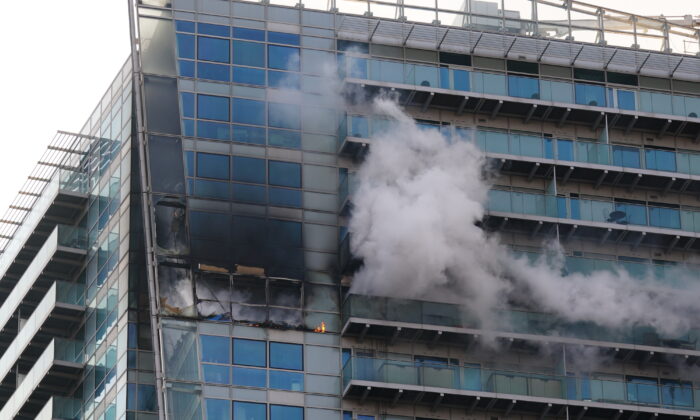 A fire has broken out in a block of flats and offices in east London.

Twenty fire engines and 125 firefighters are at the scene.

A spokesman for the brigade said: “Crews are tackling a fire on the 17th floor of the building. The Brigade’s 64m ladder has been mobilised to the incident.

“The Brigade’s 999 control officers have taken more than 50 calls to the blaze.

“The Brigade was called at 15.53. Fire crews from Whitechapel, Shoreditch, Dowgate, Bethnal Green, Dockhead, Old Kent Road, Islington and surrounding fire stations are at the scene.

“The cause of the fire is not known at this stage.”

The Metropolitan Police said the building is being evacuated.

A spokesperson for the force said: “We were called to the scene at 15.55 to reports of a fire on Whitechapel High Street by the emergency services.

“The building is being evacuated.”

A spokesperson said: “We were called at 4:07pm today to reports of a fire at a high-rise building on Whitechapel High Street.

“We sent an ambulance crew, an incident response officer, a team leader in a fast response car and members of our hazardous area response team.

“We are working closely with our emergency service colleagues, more updates to follow.

“If you are in the local area, please try and stay indoors and keep windows and doors closed.”

Original link : Fire Breaks out at Block of Flats and Offices in London