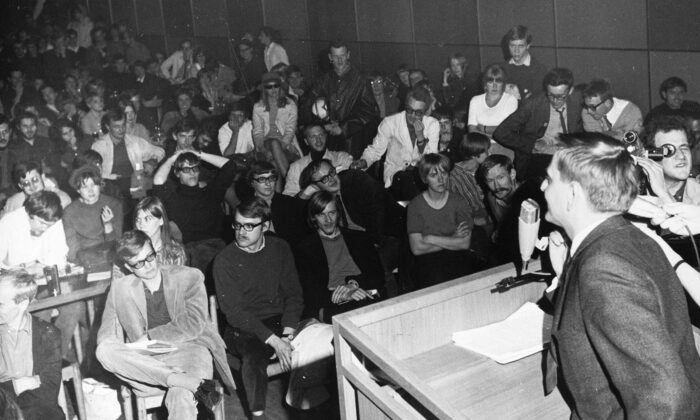 Apparently, the youth of today are a surly lot. Which maybe you knew already. But a new Angus Reid/Cardus survey says at least in Canada they’re also nihilists. It seems the adults have failed them badly.

Don’t take my word for it. Over half of “young Canadian leaders” between 18 and 40 called the baby boomers’ legacy negative, and a quarter very negative. y hate millennials even more, and nearly half between 18 and 29 want to burn society down and start over, as do 40 percent between 30 and 40.

One is tempted to make various unkind observations about these youthful leaders and those who led them into this mess. And I will. Starting with the difficulty of explaining to people keen to begin by tossing the lessons of history into the bonfire that a key lesson of history is how much easier it is to destroy than to create.

y don’t even seem to know the boomers already staged a nihilistic “long march through the institutions.” Envisioned by communist student activist Rudi Dutschke in the 1960s, it was quickly endorsed by Herbert Marcuse and others who despaired of the working class staging a revolution because it was too bourgeois, and decided the elite should revolt instead.

It did. upheaval of the 1960s, and the ongoing assault on traditional ideas and institutions since, came not from outside the “citadels of power” but inside. Thus the American “culture war” today pits coastal urban sophisticates committed to critical race theory, climate activism, and cancellation of “gender essentialism” against hinterland rubes who still salute the flag.

To say so is not to take sides. It is to state a fact. As is saying all this activism has left young people angry and alienated. Where I take sides is on the question: Who can blame them?

Orthodoxy says they’re right to be angry because society is repressive, homophobic, racist, and setting the planet on fire, climate change being “the top issue facing Canada as chosen by respondents of all age groups.” Oh, that’s original. But here’s another possibility.

Perhaps they’re right to be angry because they have been cheated of many things, including hope, stable family structure, and honour in politics. But above all of truth. y have been told by their elders there’s no such thing, then exposed to a demoralizing, hypocritical insistence that there’s only one correct view on any important subject.

It has a twisted metaphysical logic. If there is no truth, all “discourse” becomes a power struggle whose aim is to make someone endorse an idea not because it is true but as an act of pure, abject submission. It was hauntingly explained by Orwell in “Nineteen Eighty-Four”; there is not much new under the sun. But it wears novel clothes.

Indeed, it wears a uniform, because it is not the dispossessed assaulting the established order. It is the established order. While teachers uniformly claim to foster originality, nowhere are unorthodox ideas less welcome today than a public school… except a public university. And this survey shows that among youth, generally only 29 percent prefer “Starting new and restructuring society differently” to “Fixing the past mistakes of previous generations” (also 29 percent) or “Building on the achievements of previous generations” (43 percent and a plurality). It is the “leaders” who ape their elders.

Angus Reid chose its sample through various “psychographic questions … to get at qualities related to leadership identified in existing literature such as ambition or the ability to handle stressful situations” and “to measure engagement,” such as “whether respondents contacted public officials, volunteered, or attended protests.” And here I thought you measured leadership by looking for people following them in some unconventional direction.

Not these folks. y remind me of ads I once saw in Ottawa saying, “Because you don’t follow trends, you set them” over cookie-cutter rebels. Or the “Life of Brian” crowd chanting “Yes, we’re all individuals.”

Well, I’m the crank going “I’m not.” And proving it by dredging up an old BBC “Not Only… But Also” sketch with Peter Cook, Dudley Moore, and Peter Sellers sending up cultural pomposity where Cook, languidly aristocratic, praises a chef for “tremendous rage mingled with despair, a tremendous Berlin-in-the-’30s antagonism towards the established order of things.” Yes, a 1965 spoof of radical chic pointing back another 30 years.

Angry antagonism toward the established order isn’t remotely original. But they don’t know it, or realize anyone upset with the “existing order” in 1930s Germany was protesting mad radicalism, not stuffy traditionalism. Still, history can repeat itself without you grasping it. And the ultimate irony here is the impulse to fix the mistakes of boomers by repeating them.

If young people want to be less angry and bitter, they should instead follow, or lead, a rebellion against rebellion in favour of the permanent things.

Pezou : Disaffection Among Today’s Youth Rooted in Boomers’ ‘Long March Through the Institutions’