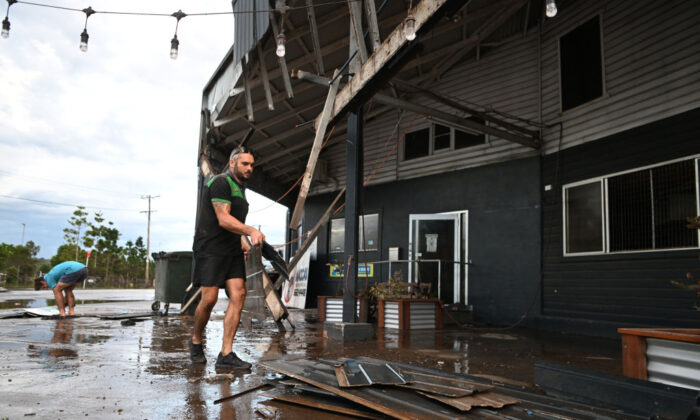 A man has died in southeast Queensland floods, taking the disaster death toll to 12, while another man remains missing.

Police say the man and a woman, both in their 60s, were trying to cross a flooded section of MP Creek Rd in their car near Wondai, in the South Burnett region, about 5 p.m on Sunday.

The vehicle was swept into the torrent, but the woman managed to get out and hang onto a tree branch before being rescued by onlookers.

A Queensland Fire and Emergency Services swift-water rescue team found the man’s body nearby about four hours later at 9 p.m.

Meanwhile, an elderly man remains missing after falling from a boat into the Brisbane River near Breakfast Creek nine days ago.

The flood-ravaged southeast of Queensland was again lashed by heavy rain, with hail reported in Logan, on Sunday night.

Almost 80mm of rain fell in Brisbane which was flooded last week when the Brisbane River broke its banks and flash floods flushed through creeks in all 190 suburbs in the city.

The Bureau of Meteorology has forecast a 30 per cent slight chance of a shower across most of the region on Monday.

The damages bill for the floods disaster is expected to be more than $1 billion, including insurance claims and major infrastructure repair, but the final number is still to be determined.

“For an event that lasted just three days, it’s going to have a big impact on our economy and on our budget,” Treasurer Cameron Dick said on Sunday.

There are still 140 people in evacuation centres and thousands of homes still without power, while six flood-affected schools in Milton, Rocklea, Milperra, Aviation, One Mile and St Helens, are unable to open on Monday.

‘This has really packed a punch, these floods have had a big impact on people and it’s going to take not just weeks but months for people to recover,” Premier Annastacia Palaszczuk said on Sunday.

The donation includes $500,000 each to the Australian Red Cross, Lifeline, The Salvation Army and Vinnies, and another $100,000 to GIVIT.

Elsewhere, Queensland’s Mud Army has been stood down after an “incredible effort” to help with the floods cleanup due to the uncertain weather, Brisbane City Council said.

“The Australian Defence Force and council officers will continue clean-up activities around the city,” it said.

“The safety of all volunteers, staff and the people of Brisbane is paramount, especially with further thunderstorms predicted and unstable weather conditions.”