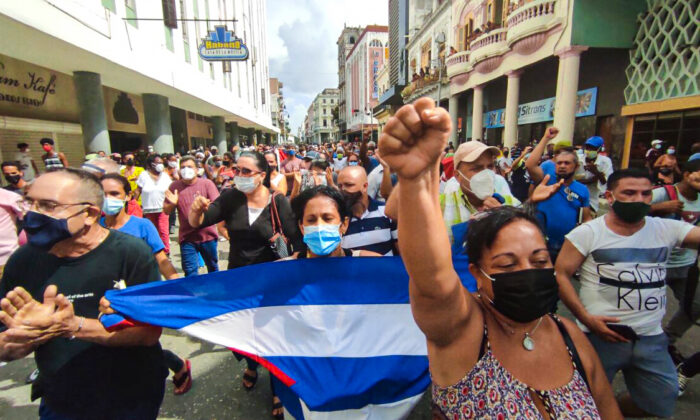 Cuba鈥檚 anti-communist movement is staying strong despite hundreds of people “disappearing” or being thrown in jail for protesting against the government’s strict聽communist dictatorship,聽according to Johnny Lopez de la Cruz.

Lopez de la Cruz is a retired colonel in the U.S. Army and a veteran of the 1961 Bay of Pigs invasion where he joined thousands of聽Cuban exiles in an attempt to聽overthrow Fidel Castro’s communist dictatorship.

In an interview with EpochTV’s “Crossroads” program, Lopez de la Cruz said that he believes that the people of Cuba want freedom, and that “sooner or later, they’re gonna get it,” adding that he believes there is “light at the end of the tunnel” in regards to the situation in the country.

Cuba’s communist government controls everything and has placed severe restrictions on individuals’ basic civil liberties while reportedly threatening and intimidating those who聽criticize the government.

But in summer 2021, the largest protest the country has seen in decades broke out nationwide as people called for greater freedoms and an end to the communist political structure, which has been in power since 1965.

Cubans also protested against ongoing shortages of food and other goods, the lack of access to economic, social, and cultural rights, as well chronic inflated prices and constant power cuts, all of which were reportedly further exasperated by the COVID-19 pandemic and subsequent lockdowns.

According to聽the Inter-American Commission on Human Rights (IACHR), as of Feb. 7 more than 700 people聽who took part in the demonstrations were arrested after participating.

“The conditions in which these people are being held include high levels of overcrowding, lack of access to drinking water and adequate food, substandard medical care, and the use of isolation measures,” according to聽IACHR, which said that many of the聽individuals who were arrested were being tried for “unspecified crimes and on unfounded and disproportionate criminal charges.”

Hundreds more who took part in the demonstrations have gone missing,聽according to both IACHR and聽Lopez de la Cruz, who said that their families simply “don’t know where they are.”

But despite the government’s attempts to silence Cubans,聽Lopez de la Cruz says the anti-communist movement is still going strong and that those opposed to the communist government will not stop until the country is rid of it.

“I think聽we’re seeing a little light at the end of the tunnel. And now聽the people are expressing their desire to be free聽because that regime doesn’t work聽and聽it’s聽[been]聽abusing for 63 years, [which] like I say, has been a tragedy,”聽Lopez de la Cruz said.

“Because the Cuban people have been abandoned basically聽in their quest to get free, and I think聽now they are demonstrating because that’s what they want; they don’t want communism, they don’t want to be a slave of the regime.”

Lopez de la Cruz noted that Cuba’s聽Communist Party聽“knows聽how to survive”聽 but聽that “we have to stop that, we have聽to stop any action for them to take over again and to continue.”

The聽retired colonel pointed to Cuba’s government being under immense economic and social pressure.

Cuba currently owes billions of dollars in foreign debt and has consistently sought to postpone repayments over the years, most recently asking the聽Russian Federation to postpone聽debts worth a total of $2.3 billion, to which it agreed.

“Now, with the聽pressure that they have economically, socially, and the people against them, perhaps they will try to change things around, maybe instead of one piece of bread a week, you know, they’re gonna give the people two pieces,” he said.

“So they say, you know,聽‘we’re changing.’ But those changes are …聽so that we [the communist government] can remain in power. That’s it, you know, so we have to be clear that that’s … what聽the future will be, but we are committed to it.聽We’ll continue on to see聽Cuba free of communism.”

Lopez de la Cruz also called on the聽armed forces of the Cuban regime to “remember where they come from” and that they have a responsibility to the people of Cuba.

“They have the responsibility not only to defend the nation聽but also to defend those people that are brothers to them, it’s聽time that the聽armies take active involvement聽in what聽will become the freedom of Cuba and its people.”