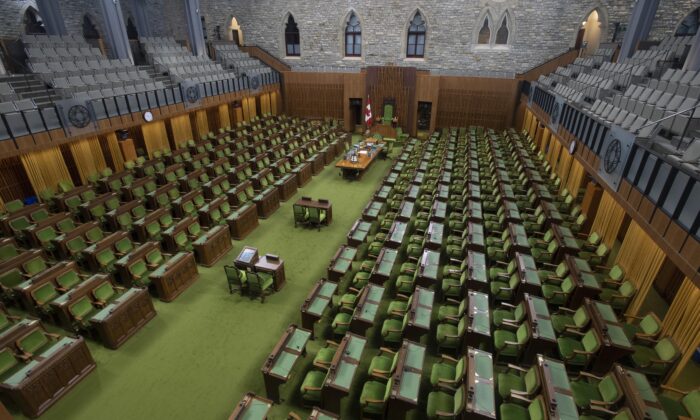 OTTAWA—Conservative MPs will oppose a government proposal today to return to a hybrid format in the House of Commons, which has allowed MPs to participate virtually in proceedings during the COVID-19 pandemic.

Conservative deputy leader Candice Bergen says her party fears hybrid sittings “let the government off the hook” and give ministers an excuse not to turn up to answer questions in the Commons.

MPs will today debate whether to resume the hybrid format, with both the Liberals and NDP supporting the move. y argue that it helps prevent the spread of COVID-19 and allows MPs who are ill, or have sick family members, the ability to participate from their homes or offices.

Conservatives and the Bloc Quebecois both want to fully return to normal in−person sittings.

Bergen argued that the hybrid format is designed to protect the government from “scrutiny and accountability,” not to protect Canadians from the deadly virus.

“ fact is that the government has been let off the hook because they haven’t been here,” she said, adding that she sometimes sat in the chamber during the last session of Parliament without a single Liberal MP or minister in the House.

She said the Government’s enthusiasm for virtual proceedings  “doesn’t have anything to do with protecting themselves or anyone else from COVID.”

“y are protecting themselves from accountability and scrutiny. We’ve seen that and we believe that it is time that it stopped,” she said.

NDP backs the hybrid format because it allows all MPs—including those forced to self-isolate if they come in contact with someone with COVID-19—to take part in Commons proceedings.

NDP leader Jagmeet Singh has said MPs should consider adopting the hybrid format permanently because it would allow MPs with young children to take part in debates from home. That, in turn, would make becoming an MP more attractive to people with caring responsibilities, he’s argued.

But Bergen said voters expected newly elected or re-elected MPs to turn up to do their jobs.

“We don’t agree that a hybrid Parliament is needed. We don’t believe it is. And we are concerned the Liberals and NDP are just going to ram this through,” she said.

She said ministers prefer “sitting in their offices evading answers” than facing questions from Opposition MPs in the House of Commons.

But government House leader Mark Holland said Tuesday the government is committed to a “full presence” in the Commons, regardless of the format.

Holland reiterated his concern that no one knows how many Tory MPs are unvaccinated, and appeared to question whether Tory medical exemptions are valid. He suggested that further validation of their doctors’ notes might be required.

Bergen hit back at Holland’s suggestion, saying it was “very dangerous” for a politician to question the integrity of medical professionals.

“I think that is reckless in many ways. Mark Holland is not a doctor. My colleague called him a ‘spin doctor,’” she said.

Conservative Leader Erin O’Toole has said all 118 of his MPs are now either fully vaccinated or have medical exemptions. He has refused to say how many have claimed an exemption for medical reasons.

Quebec Tory MP Richard Lehoux, who is fully vaccinated, is currently at home after being diagnosed with COVID-19 on Saturday, two days after attending an in-person Conservative caucus retreat.