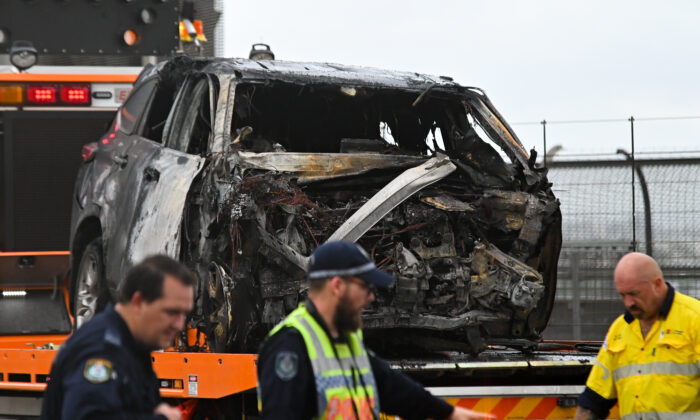 A car has flipped and burst into flames on Sydney Harbour Bridge in a head-on crash with another car in the morning peak hour just before 7 am on March 7, 2022.

At least three people were injured and treated at the scene by New South Wales (NSW) ambulance paramedics.

Two of the drivers—a man in his 30s and a woman in her 60s—were hospitalised with non-life threatening injuries and a third driver—a man in his 20s—was trapped and freed before taken to the hospital in a serious but stable condition.

Dashcam images show a black SUV heading north colliding head-on with a white van, before the SUV flips and lands on its roof, then exploding into a plume of flames.

NSW Fire and Rescue Acting Superintendent Matt Sigmund said a heroic Traffic Management Centre worker dragged the driver of the van out of harms way as the car next to it burst into flames.

“One of the traffic commanders came up to the incident in the very early stages, because he heard it, and actually dragged the van that had the person trapped in it away from the other vehicle that was on fire,” he told Today.

NSW Ambulance Inspector Giles Buchanan said that within seconds after the impact, bystanders risked their lives to run towards the cars and help the trapped drivers.

“(They) are absolute heroes, we can’t thank them enough,” he said.

“One of the vehicles was well alight when we arrived on the scene, it was an extraordinary effort to get the patient out of the vehicle safely.”

The fire was put out within an hour.

The ensuing carnage caused a major traffic jam, forcing the bridge to close in both directions as emergency services rushed to respond.

But police have advised motorists to avoid the roads in the entire city centre despite Sydney’s public transport already facing significant delays and cancellations due to the fallout from the floods and continuing severe weather conditions.

“Unprecedented rainfall is impacting the rail network and forcing some trains to run at much lower speeds,” Transport NSW said in a statement on Sunday.