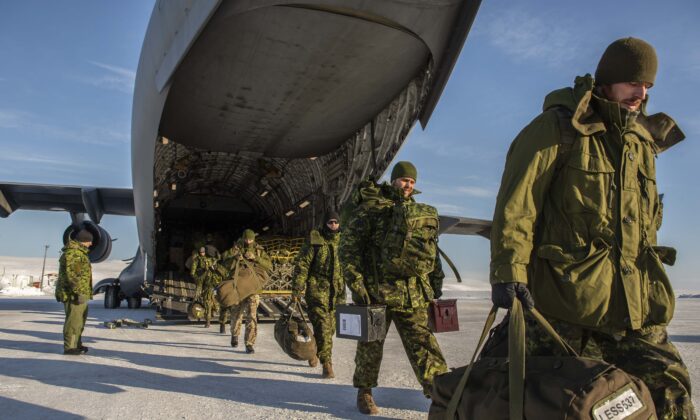 European nations are boosting defence spending in light of Russia’s invasion of Ukraine, and it’s time Canada did so too, say defence analysts. The calls also come with trying to address a number of shortcomings the Canadian military faces, especially regarding defending the Arctic.

“At a minimum, Canada should do what it said it was going to do.”

Increasing defence spending sends a “signal to Moscow” and demonstrates NATO’s solidarity, says James Fergusson, deputy director of the Centre for Defence and Security Studies at the University of Manitoba.

“It’s important if the government actually follows through,” Fergusson said in an interview.

In a March 7 press conference with the leaders of the United Kingdom and Netherlands, The Canadian Press reported that Prime Minister Justin Trudeau evaded the question on whether Canada would spend up to 2 percent on its military.

Canada is spending an estimated 1.39 percent of its GDP on defence, according to the U.S. Central Intelligence Agency’s The World Factbook. In contrast, the United States spends 3.52 percent of GDP and has been urging European nations and Canada to do better.

In a Feb. 26 statement, the official Opposition Conservatives provided a number of recommendations on dealing with Russia including what to do on the home front.

“We believe that Canada must strengthen our own defences and renew our commitment to the NATO alliance in the face of the threats from Russia and China,” said Conservative interim leader Candice Bergen.

The urgency shown by Germany and Denmark is more evident.

“We will now—year after year—invest more than 2 percent of our gross domestic product in our defence,” said German Chancellor Olaf Scholz in a Feb. 27 policy statement.

NATO data indicates that Germany spent about 1.53 percent of its GDP on defence last year.

Scholz was unequivocal about Germany’s path forward, stating, “We will stand unconditionally by our collective defence obligation within NATO.”

On March 6, Denmark announced it will gradually raise defence spending to reach 2 percent by 2033. Reuters reported that the NATO member in 2019 agreed to raise military spending from 1.35 percent to 1.5 percent of GDP by 2023.

Since Russia’s annexation of Crimea in 2014, NATO members’ defence spending has increased across Europe and Canada by US$270 billion, NATO Secretary General Jens Stoltenberg noted on Feb. 15 at a press conference ahead of the meetings of NATO defence ministers.

But for Canada, not much has actually changed regarding the threat from Russia, according to Huebert and Fergusson.

“In Canada, we’re trying to create this narrative somehow that this is all new and shocking and, how could we ever be held accountable for not knowing it was going to come? The reality is this is just a continuation of what Russia has started in 2014,” Huebert said.

Huebert pointed to Russia’s attacks on Georgia and Chechnya and said the same tactics are being used against Ukraine.

“Relations with Moscow haven’t been good for a long time since 2014–2015,” Fergusson said.

But the invasion of Ukraine does raise the chance that both Canada and the United States will take action on North American defence, he added.

“We can’t just wait and wait, and wait. So that’s getting a boost.”

Canada’s relative geographic isolation has been one reason posited for not feeling the threat of direct conflict from Russia or China; however, competition in the Arctic is growing.

Military experts have long been saying that modernization of defence systems in the Arctic is sorely needed and it was not contemplated or funded by SSE.

“The big priority where money needs to be allocated is North American and northern modernization. That’s the big one,” Fergusson said.

“We’re going to have to get into surveillance systems that actually have the capability of responding to the very extensive reinvestment that the Russians have made in terms of many of their missile technologies, including hypersonics.”

A sore spot for Canada’s military is the procurement of fighter jets—key to patrolling the Arctic.

Military and defence expert Richard Shimooka estimated in 2019 that if the government’s plan for buying new fighter jets to replace the aging CF-18s—the most significant investment in the Royal Canadian Air Force in over 30 years—kept to its schedule, the fighter replacement program will have lasted for more than 16 years upon completion.

Countries like Denmark and Belgium have done in two to three years what the current government has been promising since 2015, Shimooka told The Epoch Times at the time.

Huebert also notes that Finland and Norway made swift decisions on purchasing fighter jets, but Canada still hasn’t made a decision on replacing its CF-18s.

David Perry, a defence analyst and president of the Canadian Global Affairs Institute, says the procurement system needs to be fixed “to make it less prone to the endless delays that have become the norm,” The Canadian Press reported in an article on March 7.

In a discussion on the implications of the Russia-Ukraine crisis for Canada on Feb. 11, convened by the Conference of Defence Associations Institute, the experts were of the view that Canada’s contributions thus far have been underwhelming.

They also said that Russia’s aggression over the past eight years has effectively strengthened NATO, “a miscalculation for Putin, who thought that the invasion of Crimea would destabilize the alliance.”

Huebert says if Canada does what it said it would do, a lot of the defence shortfalls it faces will be addressed, and then it can talk about what needs to be done to meet the rising threat level in the international system, which includes China’s threat against Taiwan.

“We can’t forget that China is also an authoritarian state. It has been making similar statements about its rights for Taiwan the same way that the Russians say about Ukraine,” he said.

Regarding committing resources to supporting the defence of Taiwan, Fergusson says “it becomes sort of a vacuous commitment if we go down this path,” noting that “we’ve neglected our armed forces for so long that this has been the reality for us. We can only deal with one place in the world. Right now, that’s Europe and NATO.”

Fergusson says that he expects public interest in defence and military issues will be “fleeting” given a number of other issues such as inflation and gas prices, and that defence has “traditionally been of low political salience to governments.”

“It’s the leeway governments have relative to what they think the public will be willing to accept.”

“The bottom line is that Canadian political elites can no longer ignore the very rapidly changing geopolitical environment that Canada finds itself in.”

Original link : Canada Urged to Raise Defence Spending to 2% of GDP as Once Promised