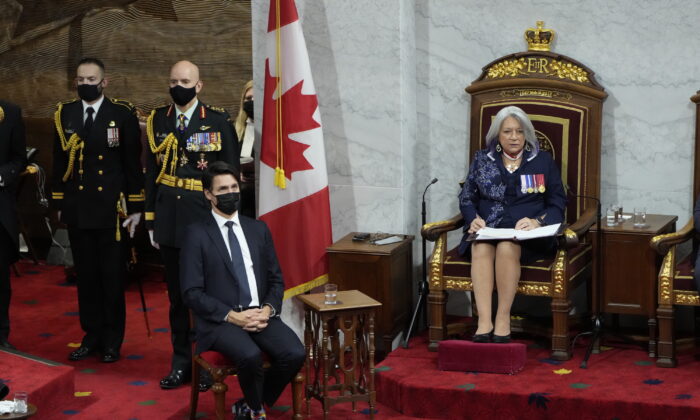 Throne speeches in Canada tend to be long on promises and short on details. Nov. 23 speech from the throne delivered by Gov. Gen. Mary Simon was no exception. Much of what was delivered was a reiteration of the government’s mandate in 2019 along with campaign promises from last fall.

In summary, there were few surprises in the throne speech.

It sticks to big-spending plans while imposing ever-stronger environmental controls. Coupled with plans to limit internet speech and continued work to remove firearms from Canadians, we see a plan modelled to appeal to the NDP.

Prime minister Justin Trudeau need’s the support of NDP’s Jagmeet Singh in order to pursue his mandate and he has to ensure there is nothing in his mandate that would force the NDP to invoke another election.

Liberals and NDP deny having a formal alliance but the throne speech makes it clear there is an informal one. Singh is no more eager to go to another election than Trudeau is and there is nothing in the throne speech that he can strongly oppose.

This was Simon’s first throne speech since being appointed as the Queen’s representative to Canada. Simon’s delivery was unique in that she began it in her native language of Inuktitut. Simon also made a point of delivering part of the speech in carefully rehearsed French. Her lack of ability in French had been a point of contention with some Quebec politicians and she demonstrated she is taking her vow to learn French seriously.

Promises have been made with little follow-through regarding issues such as clean drinking waters on reserved. With the appointment of Mary Simon as Canada’s head of state, perhaps the government really does plan to begin seriously working on indigenous reconciliation.

Simon’s words in the speech made it sound like the government planned on getting to work as she said, “We must turn the guilt we carry into action, action on reconciliation.”

Those words are written by the office of the prime minister but in being delivered by an indigenous governor general they should carry more weight. Prime Minister Trudeau embarrassed himself and his government when he snubbed First Nations communities on the very first national Truth and Reconciliation Day of his own creation. Perhaps that has motivated him to take Canada’s indigenous issues seriously going forward. Time will tell.

speech touched upon the promises made by the Liberals in last fall’s election campaign, including the mandatory buyback on banned firearms, plans to legislate content on the internet, and an intention to bring back a bill to ban conversion therapy.

ban on conversion therapy will likely turn into contentious legislation not because it really addresses a widespread issue but because it sets a trap social conservatives can’t help but jump into every time. Never mind that actually finding places that perform this controversial therapy appears to be nearly impossible, as most including Conservative MPs support the ban. But Any Tory MP who may oppose parts of the legislation covering private conversations between parents and their own children will be immediately painted as being intolerant of course and Erin O’Toole will be put in a difficult position. This gives us a hint of some of the political strategies we can look forward to in the coming session.

Broad promises were made on pandemic recovery and it was billed as being priority one. re was a mention of extending support for businesses continuing to struggle but little in the way of new spending promises. re was no indication of backing off on any supports either. Pretty thin for a top priority.

Inflation was mentioned but nothing solid was proposed in order to deal with it.

Strong words came on the environment and climate file. This is in keeping with Trudeau’s general goals and it is no surprise it was prominent in the speech.

government plans to continue on a plan to reach net-zero emissions through capping oil and gas industry emissions and carbon taxes.

re is to be a National Water Strategy created along with a National Adaptation Strategy. What those strategies will actually entail has yet to be disclosed.

Any hope on the part of oil and gas companies that the government may relent on promises to come down on their industry is dashed now.

Inflation and high energy costs are not considered to be as high a priority for the government as a net-zero electricity future.

Erin O’Toole will have plenty to work with as the speech demonstrates a continued turn to the left by the Liberals. Perhaps he will rediscover his conservative roots and provide some opposition from the right in the coming session.