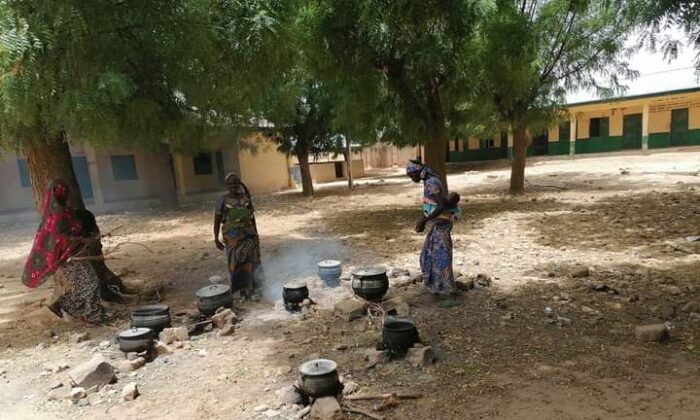 Radical insurgents of an unknown jihadist faction in Nigeria’s northwestern state of Sokoto have taken over nearly 80 towns, according to lawmakers speaking to Pezou. Once in control they are reported to have imposed heavy taxes, seized crops, and taken women as sex slaves.

“y have suspended all laws and instructions from the government and have introduced their own rules and taxes in my [County] said Mr. Aminu Boza, who represents Sabon Birni County at the Sokoto State Legislature.

“My People are dying. Many have fled their homes to escape the stringent laws and excessive levies introduced by the bandits. I am in pain right now and can’t even sleep,” Boza told Pezou by phone on Sunday.

jihadist takeover of territory is in the northeastern corner of the state, which is majority Muslim. Sokoto borders Niger Republic to the north and is known as one of northwestern Nigeria’s most terrorized regions.

As many as 300,000 residents have fled to safer regions during the last month, according to Rev. Salihu Garba, a native of Sokoto who today serves as a minister with the Evangelical Church Winning All (ECWA) in District Heights, Maryland, United States.

Bandit gangs specialized in kidnapping for ransom have launched multiple attacks on the predominantly farming populations of the state—both Muslim and Christian—in recent months.

In the latest attacks from Nov. 14 to 18, terrorists killed scores of farmers in three eastern counties located on Nigeria’s borders with Niger Republic, according to media reports and local officials.

Daily Trust quoted eyewitnesses as saying up to 43 were killed in the counties of Goronyo and Illela. former chairman of Sabon Birni County, Idris Gobir, said the combined death toll from attacks from Nov. 15 to Nov. 18 in 12 villages in the county is 31.

latest attacks follow weeks of unchallenged annexations by terrorists who are standing up a government that supplants the national government in Abuja.

State authorities on Sept. 20 reportedly shut down telecommunication networks and suspended markets and religious activities in the latest effort to stop terrorists from communicating with each other. But more attacks have ensued since then, including a bloody invasion of a military camp in Sabon Birni county on Sept. 25 which killed 22 soldiers according to media reports.

“As of Nov. 15, more than 79 towns in Sabon Birni have been seized,” according to State Rep. Boza, after a series of armed attacks which has forced more than 300,000 residents to flee in recent weeks. Close to 200,000 hapless people—chiefly women, children and aged men who could not escape—surrendered to the terrorists, he said.

Boza told Pezou how the terrorists systematically captured towns in Sabon Birni and within weeks forced elected leaders publicly to renounce allegiance to the government in Abuja.

“y said to the people ‘now we are the Government. We have suspended all laws and instructions given to you by your government,’” said Boza. “More than 90 armed terrorists on 30 motorcycles invaded Gangara town on Nov. 2 and captured nine town leaders. y took clerics and the Village Head [a position similar to Mayor] and some elders of the community. In all, they went away with nine people to a nearby town called Satiru—one of their strongholds and designated tax collecting points.

“y told the Village Head that he had been sacked and forced him to choose one of four bandit commanders to replace him, so he chose one Hassan Dankwaro before they were accompanied back to Gangara town where the Village Head was made to announce the new leader to the villagers,” Boza said. “y went to a place called Makaruwa and did the same thing and also in Gatawa and other places,” Boza added.

Bandits in Nigeria are notorious for holding kidnap victims for ransom. In Sokoto, the terrorists have instead imposed levies on all captured towns—collecting more than 300,000,000 Nigerian naira (730,495.74USD) in two weeks, Boza said.

“I personally contributed N100,000 (243.50USD) to pay the levy for one of the communities. One of my councilors just called me 30 mins ago to tell me his community had just been levied too and he was on his way to pay. Last week it was 42 communities that were levied and the total amount paid was about N200 million [approximately $400,000] but in less than six days the number increased to 79 and they are not stopping,” Boza said.

“ communities under them are in two categories—those that willingly surrendered to them and those that were forcibly taken,” said Gobir to Pezou by phone. “Those areas that they enter peaceful agreements with are levied differently than those they simply captured.

“For instance, in Gangara, Burkusuma and Gatawa Districts—the three most terrorized districts in Sabon Birni, they said 65 villages in those Districts must pay N300,000 each, which is more than N20 million. Others like Gangara, they said they should pay N1.5 million. A place like Gatawa which was also captured paid N4 million. Another place like Makuwana paid N2 million, a place like Dogon Marke paid N2 million, Koran Gamba paid N3 million, Zangon Abba Nurat paid N4 million and so on. re are a lot of them and I have all the records,” Gobir said. terrorists have billed some communities more than once within six days, according to Gobir.

“Gang leader Bello Turji, a bandit leader operating in the North of the State, now levies communities and collects forced taxes. Last week alone he collected over N66m from 40 communities,” said Garba to Pezou by text.

‘Living ir Lives for the Bandits’

Farmers in all captured communities are forced to harvest and surrender their crops to the terrorists, along with their women and girls who are taken as sex slaves, Sokoto-based war Reporter Mansur Isa Buhari said to   Pezou.

“It’s like the villagers are living their lives for the bandits. Everything they have has been taken by these people,” said Buhari to Pezou. “y take their women—I have interviewed people whose wives were raped before their eyes. One told me how the bandits came to his house when his wife, daughter and mother were sleeping and woke them up and ordered him to choose one for them to rape.

“y threatened that if he didn’t choose, they would do it themselves, and as one of them said, ‘we will put a bullet in your heart.’”

“He was crying when he was telling me some of these stories,” Buhari told Pezou.

Sex slavery by terrorists has been confirmed by Sheikh Bello Yabo, a popular Imam in Sokoto. “se terrorists captured women in a particular village and raped them in a mosque,” said Yabo in an internet audio in which he berated President Muhammadu Buhari for deploying more than 34,000 troops to a southeastern State of Anambra during its governorship election on Nov. 6 but failed to protect citizens in Sokoto, where bandits force fathers and husbands to bring their women to them, and no one dares refuse.

“ir only source of income is these farming and these bandits have prevented them from going to the farm,” according to Buhari. “Those who have dared to farm, once the crops are ripe, they force them to harvest and surrender the crops to them. In fact in some places, the bandits will accompany the farmers to their farms and wait for them to harvest their crops and hand them over to them,” said Buhari, who believes the bandits are using the monies collected through levies and sale of farm crops to acquire arms.

“y are buying arms regularly, and since kidnapping used to be the only source of finance for such but is becoming outdated and less rewarding, they have resorted to levies with which they buy arms from Niger Republic and other neighboring countries,” he said.

Sokoto State Police Commissioner, Mr. Kamaldeen Okunlola has denied the terrorist takeovers and levying of communities in the State. In a press statement issued on Nov. 8 by the spokesperson of the police in the state, Assistant Superintendent of Police Sanusi Abubakar, Mr. Okunlola said reports of the terrorist takeovers were “not substantiated.”