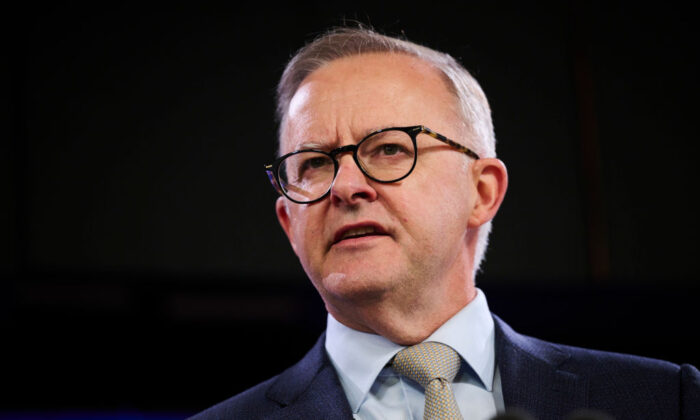 The pledge came during a major address to the Lowy Institute in Sydney, where the Australian Labor Party (ALP) leader outlined his party’s credentials amid criticism from the federal government that the ALP would be soft on Beijing and defence.

“Our allies, including the United States and the United Kingdom, understand that the global climate emergency is a direct threat to global security,” he said. “Without meaningful action, climate change will create major population displacement, drive a surge in refugees, and create new grounds for conflict over ever scarcer clean water and fertile land.”

Albanese said that if he were elected, he would ask the director-general of National Intelligence, and the secretary of the Department of Defence to carry out a risk assessment of the implications of climate change for national security.

“Instead of playing a positive role in the global effort to combat climate change, Australia is seen as one of the recalcitrant nations holding back action,” he said.

The ALP has also pledged to cut emissions faster than the Liberal Party, aiming for a 43 percent reduction by 2030 and pushing for renewable energy to account for 82 percent of national electricity production if elected.

Current Prime Minister Scott Morrison has kept to a target of 26 to 28 percent by 2030, while—under intense media pressure—agreed to reach net-zero by 2050 via technological development.

While the ALP’s climate change policy was a marked differentiator from the Liberal Party—and could appeal to younger, inner-city voters—Albanese stressed that the Labor Party would largely continue existing defence projects, including the acquisition of nuclear-powered submarines from the United States and the United Kingdom.

“We did it because of the advantage of nuclear propulsion simply in terms of the tasks that we have in terms of speed, the capacity to stay submerged. All of the advantages that it has, which were very clear,” he added. “And we made a very clear, sober decision. I think that was an example of the maturity of the Australian Labor Party.”

“In the 2009 Defence White Paper the Rudd Government outlined the need to change the force structure of the ADF to enhance our nation’s naval capabilities,” he said. “Yet here we are, nearly a decade after the Liberal Party was elected and still no actual progress.”

“After a production line of six defence ministers in this government—and two goes at landing on a model—we now have no contract for any submarine, and a looming submarine-shaped capability gap.”

Albanese said his party would consider plugging any capability gaps between the arrival of the nuclear-powered submarines and the retirement of the current fleet of Collins-class subs.

“We will consider whether tomahawk missiles can be fitted to the Collins-class submarines,” he said. “We will review the progress of the Frigates project and explore whether our naval power could be bolstered through upgraded weapons on the Arafura-class offshore patrol vessels or through additional Hobart-class Air Warfare Destroyers.”

Albanese has been at pains to present himself as a moderate leader while distancing himself from the more radical, left-leaning elements of the political scene. In fact, Australian voters have reacted poorly to recent announcements by Greens leader Adam Bandt.

Further, the Labor leader is also responding to Morrison government accusations that the ALP is weak on China and defence issues, launching salvos at the party’s record on defence spending—which reached a low 1.56 percent of GDP—as well as its connections with Beijing, which continue to cloud the party.