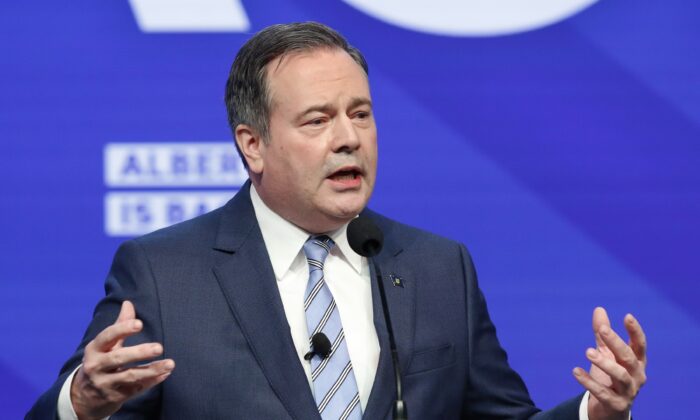 The Alberta government will suspend fuel tax collection in April and grant a rebate of $150 on Albertans’ electricity bills as energy costs continue to climb.

“Alberta’s government has been urging the Trudeau Liberals to listen to Canadians’ concerns and address rising inflation, but instead Ottawa is doing just the opposite,” Kenney said. “With their big April Fool’s Day joke—yet another hike in their job-killing carbon tax on April 1—that’s when the federal government will add three cents per litre to the cost of gas at the worst possible time.”

“Just when life is really starting to get back to normal, and now all of a sudden, people are worried about how they’re going to pay to fill up a gas tank and buy their groceries.”

Kenney said the “bold decision” to end Alberta’s provincial fuel tax of 13 cents per litre on gasoline, diesel and marked fuel, will come into effect on April 1. The tax cut will remain in place for as long as the West Texas Intermediate (WTI) oil price is above US$90 a barrel.

The tax cut will remain in effect until Alberta’s next budget in March 2023, although Kenney said the program will be reevaluated on a quarterly basis.

Alberta’s Finance Minister Travis Toews said while the government doesn’t have the legal means to force gas retailers to cut their prices following the fuel tax relief, the province will “put pressure” on them to do so.

“We will be paying attention to the pricing behaviours of retailers,” he said. “And we’ll be providing enough time so that retailers can effectively be confident that the tax that’s built into their current inventory will be rebated on top of that.”

In addition to cutting the fuel tax, Kenney said he is planning to introduce a $150 electricity bill rebate to help families with the high power bills they encountered over the past winter. He added the retroactive rebate will be automatically applied and covers “almost all households.”

“We’ll take action as soon as possible to introduce legislation and get this done. It may take a bit of time for Albertans to actually receive the rebate as we have to work with over 45 energy providers in the province,” he said.

More than one million families and businesses are expected to receive a $50 monthly rebate for three months, the government said in a press release on March 7.

Kenney said the combined new measures will provide Albertan families with $1.3 billion in fuel tax revenue on an annual basis and nearly $300 million in electricity rebates.