Ailing Infrastructure in BC, Other Provinces, Highlighted by BC Floods 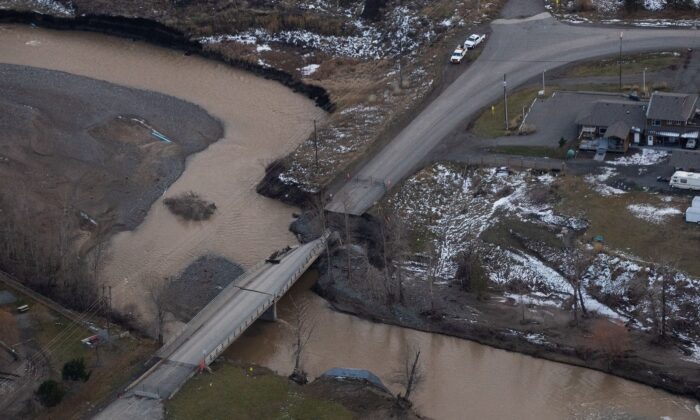 A wet fall capped by torrential rain caused landslides and washed out eight B.C. highways. Some have been reopened for general travel and others for essential travel.

floods have been especially difficult for the Abbotsford area, a problem even more frustrating for city officials given that they have pleaded for years to higher levels of government to upgrade the city’s insufficient dikes.

In 2015, engineers hired by the province deemed the condition of the 17-kilometre Sumas dike “unacceptable.” “Overtopping is expected during Nooksack River overflow,” they wrote. “ dike geometry is substandard, causing concern.”

In 2019, engineers told the City of Abbotsford it would cost an estimated $446 million to do the necessary reconstruction of the dike system. At the time, Mayor Henry Braun called for decisive action and help from higher levels of government because the cost was twice the city’s annual budget. At a Nov. 19 press conference, Braun restated his belief in the project.

“I shouldn’t say this, my staff will get mad at me, but I can see that whole structure, that whole dike, having to be repaired—not repaired, rebuilt—to a higher standard,” he said.

David Leis, a vice president at the Frontier Centre of Public Policy, said the devastation across the province was “quite astounding,” and no less in areas surrounding his home in Abbotsford.

Leis, a former mayor of Waterloo, Ont., said municipalities have been asking higher levels of government for help with infrastructure with “constant messages … almost like a broken record.”

“None of this is really that much of a surprise,” he said.

“It’s well known that there’s a lot of infrastructure that needs to be upgraded in B.C. and Canada, and politicians have consistently ignored or been in denial of this reality.”

result of this mismatch, BCG said, was a concentration of local projects and a lack of economy-driving national ones. As a result, large Canadian pension funds that invest in infrastructure send 85 percent of that money abroad.

Marco Navarro-Génie, president and CEO of the Haultain Institute, believes Canada has not only failed at a proactive approach, but also at maintenance.

“Until about five years ago, most highways and overpasses and underpasses and tunnels in Quebec were falling apart. Literally chunks were falling off these things, killing people on the roads.”

In March, the Canadian Automobile Association gave 51 percent of Quebec roads a failing grade. Navarro-Génie said prohibitive costs and short-term thinking have kept governments from giving infrastructure its due.

“Nobody wants to deal with these nearly transgenerational problems because the amount of monies are huge,” he said.

“ politicians only answer to their concerns for re-election in the next election cycle, [so] we get into big problems.”

Although then-finance minister Bill Morneau and Prime Minister Justin Trudeau spoke at the 2017 CanInfra Summit, the Liberal government soon increased regulation instead of streamlining it.

Bill C-69, which went into effect in August 2019, requires project proponents to adequately address “Indigenous knowledge provided with respect to the designated project” and “the intersection of sex and gender with other identity factors.” legislation was dubbed “ No Pipelines Act” by Alberta Premier Jason Kenney, an assessment shared by Navarro-Génie.

“Regulation for mega projects have just ballooned. federal government is introducing all these intersectional evaluations on top of all the other ones—the environmental, the energy, the labour—all of these regulations. Nobody wants to deal with that,” he said.

In the case of the B.C. floods, some politicians are putting the blame on carbon emissions. Leis, however, says the issue goes back to misplaced government priorities.

“Now you have the usual suspects, all articulating, ‘Oh, this is because of extreme weather and climate change.’ No, this is because of [governments’] irresponsible investment in infrastructure designed and required to not only enable our economy to function, but to protect people—that’s the story,” he said.

“ real issue is one of fundamental policy leadership at the provincial-federal level. … We have never spent more money in the history of our country in the form of deficits and large debts to the point where our economic future is in jeopardy. real issue is where the money goes. Instead of investing in necessary infrastructure, we get diverted by the political fashions of the day.”

Pezou : Ailing Infrastructure in BC, Other Provinces, Highlighted by BC Floods