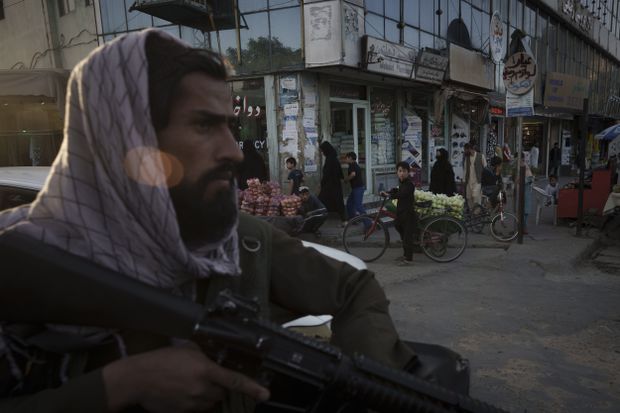 OTTAWA—Afghan women ministers made pleas to Canadian politicians for help—and shared warnings about atrocities and the erosion of women’s rights—two months before the Taliban took control of Kabul.

In June, female Afghan ministers begged Canada to “do something for us” as the Taliban advanced, says a Canadian senator who took part in a videoconference between Canadian and Afghan politicians.

desperate request was made during a Zoom meeting of the Canada-Afghanistan Parliamentary Friendship Group, attended by Canadian ministers, MPs and senators.

In July, Afghanistan’s ambassador to Canada briefed the group about brutalities, including targeted killings and moves to oppress women, as the Taliban took over more of the country.

Ambassador Hassan Soroosh gave a graphic account of the Taliban as it advanced, killing women and clerics who did not agree with their interpretation of Islam, said Sen. Salma Ataullahjan, co-chair of the parliamentary friendship group.

Ataullahjan said Soroosh also told of how the Taliban issued statements ordering local religious leaders to draw up lists of unmarried girls over the age of 15 and widows under 45, so they could be wed to Taliban leaders.

Ataullahjan, who attended both meetings, described how Afghan female ministers “kept telling us: ‘do something for us.’”

She said the June meeting—where Canadian cabinet ministers were present—rang alarm bells, and she argued that Canada should have acted sooner to evacuate vulnerable Afghans.

senator said she plans to make a statement in Parliament when it returns and press the Liberal government to explain why it did not taken more urgent steps.

She says although the Taliban’s actions were not a surprise, the meetings showed the “urgency” of the situation.

“ June one was the most significant because the women (ministers) were very concerned—you could see. re was an urgency. We were hearing that they were worried they would lose everything—all this progress (on women’s rights). y said ‘do something for us.’ re was that sense of desperation. I was really, really concerned,” the senator said.

“At the meeting with the ambassador in July we got a very, very comprehensive brief. ambassador outlined the executions that were taking place, of (people) being targeted,” she added.

By June, the Taliban were in control of almost one−third of Afghanistan and advancing swiftly. It seized control of Kabul, the capital, on Aug. 15. U.S. forces withdrew from Afghanistan, after two decades, on Aug. 30.

Canada has been criticized for not doing enough to assist Afghans, and Canadians based in the country, who wanted to leave.

In July, Canada drew up plans to evacuate interpreters who assisted Canadian Forces. In all, the Canadian military helped remove than 3,700 people from Kabul over a period of weeks before pulling out at the end of August. Liberal government has also pledged to resettle 40,000 Afghan refugees.

Ataullahjan, a Pashtun who was brought up in Pakistan but used to visit Kabul as a girl, said more should have been done after the warnings were heard.

June 14 meeting of the friendship group was also attended by Maryam Monsef, then minister for women, and Deborah Schulte, minister of seniors at the time, as well as MPs and senators, according to Ataullahjan and her parliamentary assistant, Ayah Stretch.

At the July 29 meeting—just weeks before the Taliban took Kabul—Afghanistan’s ambassador gave “horrific reports of what was happening” as the Taliban advanced, according to Stretch. She provided Canadian Press with her notes of the July meeting, and said the June meeting demonstrated just how serious the situation was becoming for Afghans.

“Afghan women ministers in our Zoom call were telling us a crisis was going to happen,” she said in an interview.

“y were telling us how bad the situation was. That was the red flag. We knew back then that we needed to act quickly. We knew what the Taliban were doing years ago—it was disappointing to hear they were doing this again.”

Global Affairs Canada spokesman John Babcock said Ottawa “remains committed to Afghanistan and the Afghan people and we will continue to do all that we can to support them.”

Canada has no plans to recognize the Taliban as the government of Afghanistan, he added.

“We recognize that Afghan women have fought hard to realize their rights, and that they deserve the international community’s ongoing support.”