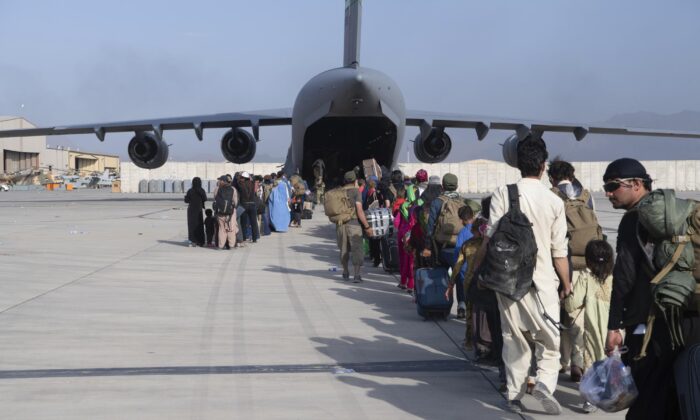 An Afghan interpreter who helped with the rescue of President Joe Biden in 2008—who was then a senator—managed to leave the war-torn nation with his family, according to multiple reports.

Aman Khalili, along with his wife and four children, “safely departed Afghanistan and subsequently initiated onward travel from Pakistan,” a representative for the U.S. State Department told BBC News on Monday.

“y did so with extensive and high-level engagement and support from the U.S. Government, and we are grateful for the many others who also supported him along the way,” the official said.

Biden and his fellow senators at the time, John Kerry and Chuck Hagel, were traveling in Afghanistan in 2008 when a snowstorm forced the helicopter they were flying in to land in the mountains.

Khalili helped rescue Biden and the other two U.S. lawmakers by driving the group to safety. senators were then escorted by U.S. troops to Bagram Airbase on foot.

Since the Taliban terrorist group took control over Afghanistan in August, the interpreter, who went by the alias of Mohammed, had been appealing to Biden for help overcoming visa issues to leave the country.

“Hello Mr. President: Save me and my family,” he told  Wall Street Journal at the time. “Don’t forget me here.”

Khalili tried applying for a Special Immigrant Visa (SIV) and evacuating Afghanistan before the United States withdrawal, even earning a recommendation from Lt. Col. Andrew Till because of his assistance to the U.S. military.

But his application was not approved, the paper reported, and an attempt to get into the Kabul airport in September wasn’t successful because American troops told him they would only let him through, not his wife or children.

White House press secretary Jen Psaki expressed gratitude for the interpreter in September for offering help to Biden in 2008, saying American officials will try everything to help get him out.

“We will get you out. We will honor your service, and we’re committed to doing exactly that,” she said.

Tens of thousands of SIV applicants remain in Afghanistan, according to aid groups. Association of Wartime Allies has pegged the number as high as 118,000 when including the applicants’ family members.