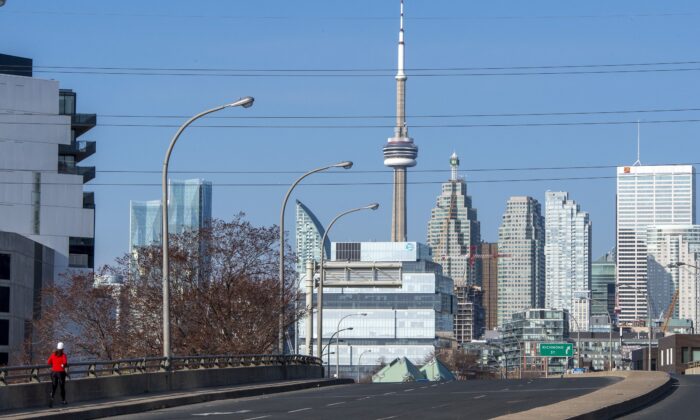 An academic working paper released in the spring outlining the failures of pandemic lockdown policies has been largely ignored by media, says its author.

Douglas Allen, an economics professor at Simon Fraser University, says his study went viral after he posted it in April and he received positive feedback, leading to interviews on podcasts in Canada, the United States, Europe, and Australia. Even a few politicians reached out, he says.

But as far as media goes, his study received little attention. Aside from Pezou, “no major media outlet contacted me,” Allen says.

Toronto Sun did publish an article based on Allen’s findings in April, and former independent MP Derek Sloan mentioned the study to the Kingston Whig-Standard after he was arrested for attending church in April in Aylmer, Ont., in defiance of the lockdown.

Allen also published a column in the Financial Post in June outlining his findings. But that is essentially the extent of press coverage in Canada.

Titled “Covid-19 Lockdown Cost/Benefits: A Critical Assessment of the Literature,” the study was officially published on Sept. 29 in the International Journal of the Economics of Business.

lack of coverage was probably something Allen predicted, as he wrote in April that despite the “overwhelming” amount of research papers on COVID-19—40,000 in a year—“the ubiquitous media, public health, and political response to the pandemic has been one-sided, incomplete, and almost unchanging over the past year.”

“Furthermore, when research results contrary to the official government response were shared on social media, they were often pulled from social media platforms. As a result, for average Canadians the public media and official public health news conferences have been the only source of Covid-19 information,” he wrote.

Based on his examination of over 100 COVID-19 studies, Allen assessed that “it is possible that lockdown will go down as one of the greatest peacetime policy failures in modern history.”

“Over the course of the Covid-19 pandemic, there has been no public evidence that governments around the world have considered both the benefit and cost sides of their policy decisions,” he wrote.

Allen highlights that most of the early research on lockdowns only examined their benefits without looking at the costs, and many used faulty models and made assumptions that proved to be wrong.

“Early in the pandemic the Neil Ferguson et al. model appeared to drive many lockdown decisions and was widely covered in the media,” he wrote, referring to Imperial College of London (ICL) professor Neil Ferguson and his March 2020 report, “Impact of non-pharmaceutical interventions (NPIs) to reduce COVID-19 mortality and healthcare demand.”

“ Ferguson et al. model was spectacularly wrong; off by factors of 5.88 to 14.71,” Allen wrote regarding Ferguson’s prediction of the number of deaths from COVID.

“Problems with the ICL model were pointed out immediately,” he wrote, such as an overly high transmission rate, an overly high and not age-dependent infection fatality rate, hospital capacity assumed to be fixed and unchangeable, and the assumption that individuals would not change their behaviour in the face of a new virus.

No Benefit From Lockdowns

Before addressing the costs of lockdowns, Allen highlights a number of studies documenting their lack of apparent benefits.

He cites a study by Christian Bjørnskov, professor of economics at Aarhus University in Denmark, that states: “Comparing weekly mortality in 24 European countries, the findings in this paper suggest that more severe lockdown policies have not been associated with lower mortality. In other words, the lockdowns have not worked as intended.”

Also cited is the work of John Gibson, professor of economics at the University of Waikato in New Zealand: “Lockdowns are ineffective at reducing Covid-19 deaths. Variation amongst counties in the United States, where over one-fifth had no lockdown, shows no impact of lockdowns. Specifically, one cannot reject the hypothesis of zero difference in deaths between lockdown and non-lockdown counties.”

On the costs of lockdowns, Allen explains that research has “lagged that of the benefits, and even still is incomplete and piecemeal because there are several critical issues which will take time to sort out.”

Some research has focused on the loss of gross domestic product (GDP) caused by lockdowns. A paper published by the Cambridge University Press in July 2020, which Allen says underestimated the costs and overestimated the benefits of lockdowns, still concluded that “the costs of the three-month lockdown in the UK are likely to have been high relative to benefits, so that a continuation of severe restrictions is unlikely to be warranted.”

re are also far-ranging human costs, such as lost educational opportunities, with low-income families suffering more than others, and an increased risk for children’s mental health. Other costs are increased deaths expected from unemployment, increased deaths from overdoses and other deaths of despair, increased domestic violence, lost non-COVID-19 medical service, and loss of civil liberties.

“In light of the nature and measurement problems associated with the costs of lockdown, as of July 2021 no true, standard, cost benefit study has been conducted,” he wrote.

To arrive at some conclusion regarding overall costs, Allen presented an alternative cost/benefit methodology using years of life lost due to lockdowns that was put forward by Bryan Caplan, professor of economics at George Mason University. According to Allen’s calculations, the “reasonable conservative case” is that the cost/benefit ratio for Canada is around 141, meaning the cost of lockdowns is 141 times greater than the benefit.

Pezou contacted the provincial health departments of Ontario, New Brunswick, and Nova Scotia seeking comment on their lockdown policies and whether, in light of Allen’s study, they would impose lockdowns in the future. None of the provinces responded by press time.

Allen does not have high hopes his research will have an impact on policy.

“I do not think my report will matter,” he told Pezou. “I think we are in a bad political equilibrium where politicians cannot admit they made a mistake. Hence they must continue to double down and insist on restrictions until they can finally declare victory and that they saved our lives.”