FILE – Residents are screened for trachoma, a neglected tropical disease and the world’s leading infectious cause of blindness, in a village in Mali, Jan. 23, 2017. (The Carter Center via AP)

Malawi has become the first country in southern Africa to eliminate trachoma, the leading infectious cause of blindness, the World Health Organization announced.

It is the fourth country in Africa to stamp out the bacterial infection, after Ghana, Gambia and Togo. The WHO said in a statement that Malawi has been known to be endemic for trachoma since the 1980s.

The disease received due attention in 2008 following a survey conducted in support of the WHO and Sightsavers, a nongovernmental organization.

The findings spurred the country to step up efforts against trachoma by establishing a national taskforce which implemented the WHO-recommended strategy known as SAFE to control the spread of the disease. The SAFE strategy comprises provision of surgery, antibiotics to clear the infection, facial cleanliness and environmental improvement through access to water and sanitation. 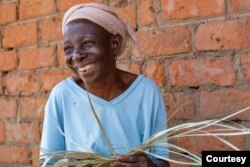 Bright Chiwaula, country director for Sightsavers in Malawi, said besides the SAFE strategy, the achievement is also a result of several elements, including training of surgeons and the promotion of good hygiene education.

“Another element is where we assured that we had a monitoring mechanism in place that was effective and efficient, making sure that we were able to track what was happening in the country as regards trachoma elimination,” Chiwaula said.

Trachoma is one of a number of neglected tropical diseases, or NTDs, and is endemic in nearly half the countries in Africa.

In a statement Wednesday, Malawi President Lazarus Chakwera paid special tribute to community health workers, many of them women, whom he said played an instrumental role in freeing millions of citizens from the misery caused by these diseases.

Chakwera said he hopes such an achievement would be replicated in the fight against other NTDs like scabies, schistosomiasis and river blindness.

Caroline Harper, CEO of Sightsavers, told VOA Thursday that her organization is working towards that.

“The great news is that Malawi is very close to eliminating river blindness,” she said. “Sightsavers in Malawi are helping the ministry to do that. We are actually working in 30 countries on NTDs across the whole of Africa.”

Harper said Sightsavers made a commitment at a global summit in Rwanda in June to invest at least $20 million in the fight against neglected tropical diseases, but added the organization is hoping to raise far more than that in the future.