After the death of Queen Elizabeth II, several nations that have long had a British monarch as their head of state are pondering charting a new course to become republics. In the Americas, this includes Belize, Antigua and Barbuda, Jamaica and the Bahamas, following the decision by Barbados to shed the monarchy earlier this year. Republicanism has also been on the rise in Australia, where a vote on leaving the monarchy could be held in coming years, according to some experts.

But what about in Canada, a culturally diverse nation with a substantial proportion of French speakers? Observers say the process for abolishing the monarchy in Canada would be nearly impossible to launch in the short term.

“Abolishing the monarchy would require a feat of political maneuvering that has rarely been seen throughout the years, requiring unanimous agreement among the House of Commons, the Senate and all of the provincial legislatures,” wrote Amanda Connolly from Canada’s Global News, in a September 18 article about Prime Minister Justin Trudeau ruling out such an effort in the near future.
Canada’s Indigenous people, who long suffered under colonialism and continue to experience its aftereffects to this day, nevertheless issued several statements of condolences to the British people after the queen’s death.

While not calling for the abolition of the monarchy, Indigenous leaders have expressed concern that King Charles III could be less likely to support them in the process of reconciling the colonial past.

French Canadians are seen as less enamored with the monarchy than many of their English-speaking compatriots. French Canadians trace their history back to the colonization of what is now Canada by France before the British conquered French-held lands and expelled many French-speaking inhabitants.

Robert Lacey is a British historian who wrote The Crown: The Inside History.

“Most English-speaking Canadians will probably accept King Charles as their new head of state,” Lacey told VOA. “But whether French Canadians welcome him seems less certain.”

“French Canadians are generally most indifferent or negative toward the monarchy,” said Philippe Lagasse, who teaches international affairs at Ottawa’s Carleton University, speaking with VOA. “This reflects the fact that the monarchy has come to be associated with assimilation, the historical oppression of the French population and, most importantly, a modernizing impulse that accompanied Quebec’s Quiet Revolution in the 1960, which saw the [Catholic] church’s influence greatly diminished and Quebec nationalism rise.” 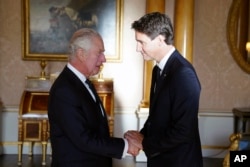 But despite significant pockets of resistance to the monarchy in Canada, Lagasse sees no easy path to ending it.

Asked what leaders in Ottawa might think, Lagasse noted, “The reaction is muted at the moment. A lot will depend on the kinds of decisions that the king makes about his role and the Crown’s presence in the realms. If the king courts controversy, that will cause concern. At the moment, though, it is too early to tell.”

Political scientist David Johnson of Cape Breton University in Nova Scotia said whether or not to retain the monarchy is a topic of discussion.

The code has been copied to your clipboard.

The URL has been copied to your clipboard

He added that republicans outnumber monarchists but that many Canadians are indifferent.

“The problem for the republican movement is to mobilize and work toward a constitutional amendment and that is difficult,” Johnson said. “There has never been a prime minister or premier who came to power on an abolition platform, not even [in] Quebec.”

“The ascension of King Charles III to the throne does not change anything for Canada,” said Vismay Buch, a University of Toronto undergraduate student with an international relations focus. “He will be following the centuries-old tradition of the British Monarch being the Canadian Head of State.”

A poll in April found two-thirds of Canadians viewed Queen Elizabeth II favorably but that 51% did not favor Canada continuing as a constitutional monarchy.