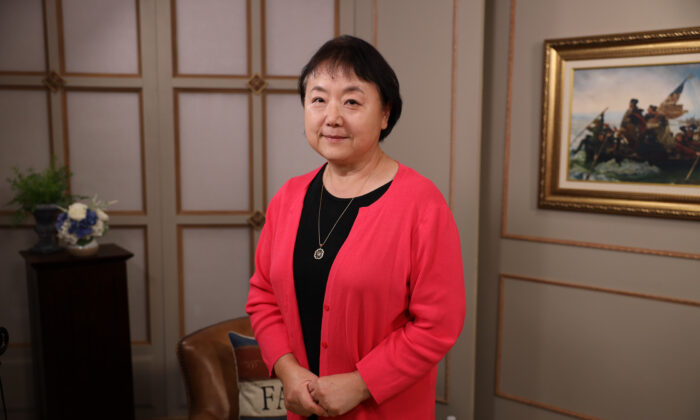 American Thought Leaders host Jan Jekielek spoke with Xi Van Fleet, a Virginia mom from China who made headlines after she compared the rise of critical race theory (CRT) to China’s Cultural Revolution at a Loudoun County School Board meeting.

Jan Jekielek: When you went up to the mic at Virginia’s Loudoun County School Board, you had some strong words to say about trends that reminded you of your experiences in China.

After that, I was sent to work in the fields to receive reeducation from the peasants—like many urban youths.

Ms. Van Fleet: Deng Xiaoping was in power and said we needed to send youths to college. I passed the examination and studied English.

Mr. Jekielek: Why don’t we start with you explaining what the Cultural Revolution was?

Ms. Van Fleet: Mao implemented a lot of disastrous policies before the Cultural Revolution. One of them resulted in the famine of some 40 million people who starved to death.

Some in the party were questioning his leadership. He started the Cultural Revolution to remove his political enemies on all levels.

He wanted to put his own people at every level, and that’s the reason he unleashed the Red Guards, the indoctrinated youth in colleges and universities.

Mr. Jekielek: Tell me what you saw.

Ms. Van Fleet: I was a first-grader and had one semester of normal education.

And then to me, my memory is just overnight, the class stopped. And I saw big character posters everywhere. So those are just people writing down whatever criticism, that’s the Chinese word for it, but it’s really denunciation and an attack on teachers, on school administrators, and on each other.

What I remember is the chaos in the classroom. And the teacher wrote a note on the blackboard, that said no school for three days. And that stayed there for two years. No school for two years. So when I went back to school, I was in the fourth grade. So I missed second and third grade—no school.

Mr. Jekielek: And who were these Red Guards?

Ms. Van Fleet: Everyone was a Red Guard. If you were in high school and even in elementary school, they were just too little, but were called the Little Red Guards. But they were organized by themselves, because Mao openly supported them. And they just chanted Mao’s slogan, “Rebelling is justified.”

And Mao said, “Revolution is not a dinner party, and it is violent. So go ahead, do your revolution.”

So with Mao’s approval, no one could stop them. So the first thing they did was dismantle the law enforcement and the court system. y even made up their own laws. One of the things they were told was to get rid of those people in authority. And who were the people in authority? first was the teachers.

So many teachers were struggled against, paraded around, and many were beaten, some to death.

re was no consequence. Even today, their crimes were never prosecuted. Those people who died, died in vain, forgotten, except by their families.

Mr. Jekielek: So you’re talking about this struggling. And so I guess these posters were also encouraging people to join in these struggle sessions. Could you just explain what that is exactly?

Ms. Van Fleet: se struggle sessions confused me. One day I was out with a friend. Sometimes they used trucks to parade people and with the sign of a name crossed out. We looked at the name and we were stunned … it was my friend’s father.

Mr. Jekielek: other part was the destruction of history.

Ms. Van Fleet: That’s the central feature of the Cultural Revolution. Mao told the Red Guards, “We should get rid of the Four Olds.” old ideas, old thoughts, old tradition, old custom, and old habits. What are they? y’re the traditional culture and civilization.

So all the Buddhist statues were torn down, temples were destroyed or burned. And what I witnessed was Red Guards going door to door to raid homes. And so, they would just go to homes and take out anything that was old.

Old vases, antique furniture, anything: y would just take these things and burn them or smash them.

You couldn’t wear anything fashionable. I witnessed Red Guards cutting a girl’s hair off because her hairstyle wasn’t approved. It was insane. Absolute madness.

Ms. Van Fleet: Just like Antifa, which is why it looked so familiar to me. Antifa and the BLM [Black Lives Matter] activists knew they could do it. Same as the Red Guard. y knew there would be no consequences.

Mr. Jekielek: Let’s move to the present. People became aware of you, as I did, when you stepped up to the mic at the school board meeting. What inspired you to do this?

Ms. Van Fleet: Actually, I’ve been seeing America going in the wrong direction for a long time, for I would say at least 10 years. turning point for me was the riots. re’s no doubt whatsoever—this is cultural revolution.

After that, I joined the Loudoun County Republican Women’s Club. I got their emails and calls for action. One of them was, “Go speak to the school board.” That’s what I did.

Mr. Jekielek: You were telling me that in China people died, people were killed in terrible ways, there were these constant struggle sessions. That seems more extreme than what’s happening in America. So how is this like the Cultural Revolution?

Ms. Van Fleet: People here are very afraid. I see them, especially in my workplace. So there’s the right way to talk. re are the right ideas and the others who don’t share it feel like if they tell their own opinion, they might run the risk of being considered racist.

That’s the word like in China: counter-revolution. It fit everyone.

Ms. Van Fleet: It’s like saying counter-revolutionary in China. A racist is someone who discriminates against someone else based on their race. But now the meaning has changed. If you disagree with leftist ideology, you become a racist.

So now, I see the same thing in America, because racist is a hat that fits all. We see people getting called racist who have nothing to do with racism.

Mr. Jekielek: Something just struck me when you’re talking about these historical counter-revolutionaries. That’s something that you could actually inherit from your parents.

Ms. Van Fleet: In order to continue the class conflict, Mao had to make new enemies. One of the things he did was to make this hereditary. If you were born to parents who used to own land, you were considered a class enemy at birth.

Mr. Jekielek: So how is it the same thing?

Ms. Van Fleet: Classic Marxism divides by class. And it was successfully used in countries such as Russia, China, and other underdeveloped countries. But in America, the class division hasn’t worked so well so far. So they have to come up with something different.

CRT is tailor-made for America. y also use class, gender, sexuality, and intersectionality to divide people. All of these are the tools to divide and all of these are rooted in cultural Marxism. Mao used it and the left is using it now.

Mr. Jekielek: In a recent letter, the National School Board Association said there’s an immediate threat of violence from parents. Justice Department basically responded, “ federal government is going to address such threats.” Is there a threat?

Ms. Van Fleet: Parents are angry. But is that considered violence? government considers this violence because they don’t want parents to be part of the education decision.

Mr. Jekielek: How have you seen things change?

Ms. Van Fleet: Parents are waking up. During COVID, parents saw what was going on in the classroom through Zoom.

Mr. Jekielek: What’s next for you?

Ms. Van Fleet: Because of that school board meeting speech I made, I was able to reach more people. I have to say I’m doing this because I want to wake people up. What’s happening here in America is nothing new. It happened in China. It happened to me and this is my lived experience. And if we let it go and don’t stop it, we’ll have the same result.

I urge all immigrants who love this country and have experienced communism to speak up. This is our last chance. If we don’t save this country, there’s no place for us to go.

Pezou : Witness Warns of Parallels Between China’s Cultural Revolution and the US Today