Wife of Jan. 6 Prisoner: ‘We’re Being Targeted,’ It’s All About ‘Revenge’ 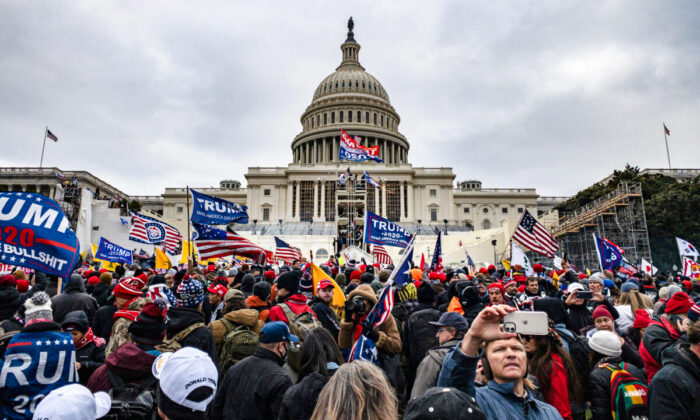 The events of Jan. 6, 2021, at the United States Capitol have been described by some as an attempted “coup,” “domestic terrorism,” and a “deadly capitol insurrection.” But the jailed participants, and their friends and family, are convinced Jan. 6 participants are being targeted and threatened because of their support for former President Donald Trump.

“I know they are definitely being targeted, especially in the jail, and us as a family,” said Angel Harrelson, whose husband, Kenneth Harrelson, is in jail on charges of sedition and conspiracy related to his presence at the Capitol on Jan. 6.

Angel Harrelson of Titusville, Florida, told The Epoch Times her husband has received death threats in jail and that she and her family have been targeted and harassed by the media. She said her husband also received a postcard in jail that included the family’s home address.

“They’ve threatened his whole family and they’re allowing those cards to get through over there,” she said.

About 700 people have been charged in connection to Jan. 6, and dozens have been sentenced to jail time, house arrest, and probation. More than 500 cases against Jan. 6 defendants remain open, The Washington Post reported in January.

Republicans have criticized the committee, stating the investigation is politically driven.

Despite claims to the contrary by several politicians and media figures, the FBI found no evidence that the breach of the Capitol was a coordinated attack, Reuters reported.

Kenneth Harrelson, 41, is a U.S. Army veteran. His wife said he traveled to Washington on Jan. 6 to protect Trump supporters from Antifa, a violent left-wing activist group that often disrupts conservative events.

Kenneth and Angel Harrelson have four children, including an 18-year-old son who will be graduating this year. He enlisted in the Army and will leave for boot camp a month after graduation. They also have a 15-year-old daughter who is mildly autistic and suffering terribly in her father’s absence, Harrelson said.

Angel Harrison said her husband and other Jan. 6 defendants are served rotten food, and that it’s up to family members to raise money for the defendants’ commissary accounts.

“We spend about $125 at the commissary per week, and care packages cost about $125 per month,” she said. She has set up a GiveSendGo account to help cover the continued costs, as well as an online store, selling products in support of those being persecuted as “Political Prisoners of War (PPOWs).”

Angel Harrelson said she hasn’t seen her husband since he went to jail a year ago, and that he’s become depressed. She said prosecutors are angry that he rejected a plea deal.

Kenneth Harrelson was first charged with obstruction, then conspiracy and sedition, his wife said.

Angel Harrelson also said her husband is accused of obstructing police officers by surrounding Capitol Police Officer Harry Dunn, but Harrelson said the protestors were protecting Dunn from rioters who had become violent.

Dunn is the officer who made unsubstantiated claims that the Jan. 6 protesters used a racial slur against him.

Prosecutors argue Harrelson was a leader for the Oath Keepers, with access to high-powered firearms. They allege Harrelson is present in photos captured at a Comfort Inn outside Washington, and that he’s seen in photos rolling a cart down the hallway after a riot. Authorities insist there is at least one rifle case on the cart.

Brad Geyer, attorney for Kenneth Harrelson, told The Epoch Times there were no unlawful firearms involved in the Jan. 6 events.

According to Geyer, the Oath Keepers were there in an official capacity to protect “VIPs” who were speaking during different events during the rally, and “it was standard operating procedure for the Oath Keepers” to “provide a strong defense” in that environment, he said.

Geyer insists the Oath Keepers were never in an altercation with Capitol Police, and that the group’s members kept their legal weapons in Virginia because firearms are not allowed in Washington.

Harrelson is also accused of searching for Pelosi during the breach and engaging in text messages threatening the House speaker’s life. Geyer said Harrelson did not participate in those messages, which were part of a group chat, and that his phone wasn’t working while he was inside the Capitol Building.

“There was some kind of jamming going on, which makes it difficult for people to communicate with each other,” Geyer said. “If there was something bad going on, people couldn’t warn others to stay away. I don’t think that was a mistake.”

“There was no breach,” Geyer said, noting that prosecutors are fond of using that word. “No breach. Opening the door from the inside and inviting them in makes them invitees.”

Geyer said he will try to identify the police who ushered Harrelson up the steps and held the doors open to invite him inside.

If Kenneth Harrelson is convicted, his wife said the family will lose the veteran’s benefits they rely on for their house payment, car payment, and daily needs.

She said she’s always looked up to the police and trusted the government to find the truth about the situation, but now, she said she feels betrayed.

“I’ve known police officers all my life and a few are my best friends,” she said. “But how am I supposed to trust any of them now when they lie? I know my husband is innocent.”

“I assumed that on some level, there would be some level of guilt, that you would be able to find something that he did,” Geyer said. “But his level of innocence is so overwhelming, it was a wake-up call for me.”

Geyer said the fallout from Jan. 6 has led to “a strange, mass psychosis event” surrounding defendants, and that the federal government maintains the façade of the Jan. 6 investigation by demonizing Harrelson and other defendants so they appear dangerous.

“He poses no threat of flight, and any suggestion to the contrary is concocted or made up, but they’re never going to let him out,” Geyer said.

Original link : Wife of Jan. 6 Prisoner: ‘We’re Being Targeted,’ It’s All About ‘Revenge’